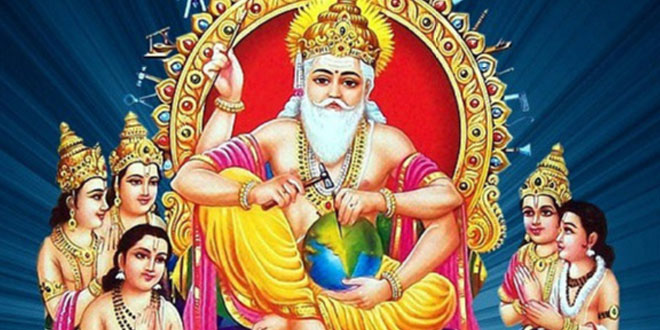 The beginning of the sixth month is largely marked by Kanya Sankranti, according to the Hindu Solar Calendar. Sankranti is the time when Sun changes position from one rashi to another. This day is also celebrated as Vishwakarma Jayanti. All the twelve Sankrantis in the year are highly auspicious for alms giving and charity purpose. In Odisha and West Bengal (India), Biswakarma Puja is the main ritual on Kanya Sankranti.

Vishwakarma Jayanti is celebrated on the birthday of Lord Vishwakarma, a deity who is considered as the divine Engineer. He is also known as the The Architect of Gods or Devashilpi. As per the Georgian calendar, the festival is largely celebrated in the month of September. Lord Vishwakarma is considered as the symbol of excellence and quality. According to Hindu methodology, Lord Vishwakarma architected the whole world according to the directions of Lord Brahma, the lord of creation. He constructed the holy city of Dwarka where Lord Krishna rules and the Maya Sabha of the Pandavas and many marvelous weapons for the Gods.

This festival is celebrated in factories, industries, shops and colleges and people worship Lord Vishwakarma along with their respective instruments. Along with the engineering and architectural community, Lord Vishwakarma is also worshiped by professionals such as craftsmen, welders, smiths, artisans and factory workers. The workshops, warehouses, and even the small cottage industries are cleaned out and the puja is performed amidst chanting of the mantras by the priests. The devotees worship him for their progress and a better future. By worshiping with sheer dedication, the devotees seek the blessings for their safety at work. On this day, no work is done in the industries or factories. Workers also pray for the smooth functioning of their machines.

Traditional recipes are utilized to prepare the Vishwakarma lunch. Devotees organize feasts in organizations and temples. The food offered during the puja is distributed as prasad (holy offering) to the people who visit the pandals. The prasad mainly consists of sliced fruits with a few sweets thrown in. The lunch and other meals prepared according to the traditional Vishwakarma puja recipes are shared with colleagues and friends. The main food cooked at the Vishwakarma day includes naivedya, fruits, khichdi, kheer, mutton, boondi and ladoos.

Since every man is known by the work he does to earn his living, it is important for him to respect and worship his work and worship the one who made him able to complete that work with all those great tools and weapons. It is because of those tools he is able to produce quality and quantity of his product and services. Lord Vishwakarma is considered as the whole and sole of artistry, craftsmanship, carpentry, engineering and more.