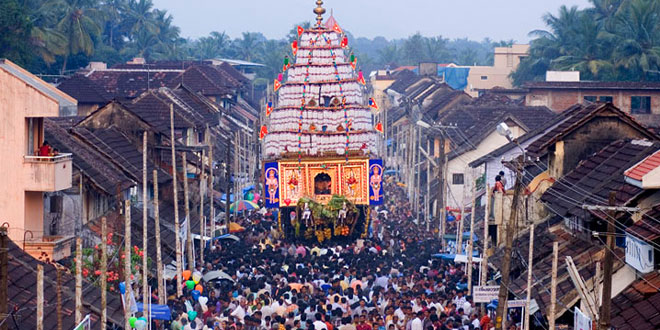 Kalpathi Ratholsavam, also called as Kalpathi Chariot Festival is an annual Hindu Festival celebrated mainly in the Kalpathi village in the state of Kerala. The festival is celebrated at the Sri Visalakshi Sametha Sri Viswanatha Swamy temple dedicated towards Lord Shiva and Goddess Lakshmi.

The Chariot Festival is celebrated every year in the month of November. It is a ten day event. Over the years the festival celebrations have gained immense popularity in the Kerala State of India.

The celebrations at the festival includes Vedic recitals and cultural programs for the first four days and through the last three days Chariots for the Lord are decorated by devotees. Devotees from all across India gather here during the Festival.

According to the legends the Festival is traced to be about 700 years old. The temple of Sri Visalakshi Sametha Sri Viswanatha Swamy dates back to 1425 A.D. The temple is known to be the oldest Lord Shiva temple in Malabar. It is situated at the Southern bank of river Neela Bhagirathi.

The annual Chariot Festival is a tribute to the Indian culture and traditions that has been well preserved by the people of Kerala. The Festival is a must watch spectacle, and even the weather of the place during the time of Festival is absolutely favorable.