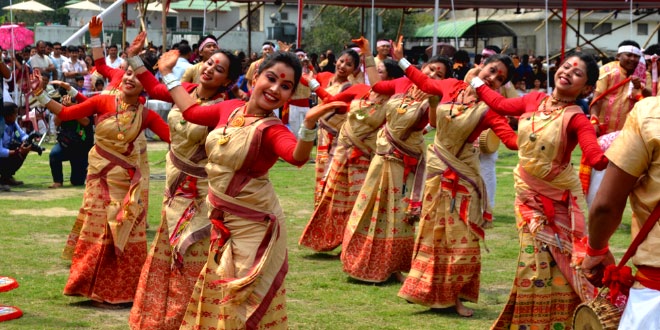 Husori is another important aspect of Bihu. Here the village elders move from household to household singing Bihu geets and performances. The Husori groups are traditionally welcomed in the courtyard and they after the performances give blessings to the household.

In this form of Bihu, young unmarried men and women attired in traditional golden silk Muga perform the Bihu dance and sing Bihu songs in the open fields.

This form of Bihu is performed and watch only by women. The name ‘Jeng’ is derived from the fact that in earlier time, village women used to surround their place of performance with sticks dug into the ground. This Bihu form is also called Gos tolor Bihu.

This is the urban form of Bihu where the rural festival made its transition into the modernized urban life. It was first started in Latasil field in Guwahati by the Guwahati Bihu Sanmilani 1962. It was promoted by personalities like Radha Govinda Baruah, Khagen Mahanta among others. Here the dancers perform in a makeshift elevated stage which is popularly known as Bihutoli. The performances in the Bihotoli are not confined to Bihu dances. The performances include a range of other theatrical shows; other dance forms performances, solo singer concerts and stand up comedy. the stage Bihu form have become so popular that different Bihu organizers have extended the celebrations to Bohagi Bidai, which is celebrated for bidding adieu to the festive Bohag month.

Bihu celebration is insignificant with the traditional instruments of Assam. There are a variety of instruments which are used during Bihu performances, Bihu geets and dances. Some of them are:

Taal: It is a small cymbal instrument. There are different types of Taal.

Pepa: Pepa is a flute like musical instrument used in Bihu. It is a small stem capped with buffalo horn. The sound of the Pepa is striking and mesmerizing.

Other instruments used are the Toka, Gagana, Xutuli and Baanhi (flute).