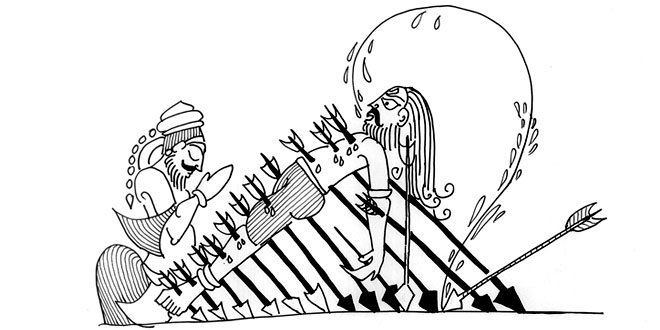 Bhishma Ashtami is an important ritual observed by Indian Hindus as part of their respect to legendary Bhishma. As per the incidents related to Mahabharata, Bhishma is regarded as the youngest son of King Shantanu and Ganga Devi. According to the Hindu mythology, Ganga agreed to marry Shantanu only on the condition that he will never question her for whatever she does. However, seven of the eight children were drowned in River Ganga as per a curse about which King Shantanu was unaware of. Out of agony, he finally asks Ganga why she is drowning all kids in such a ruthless manner. As Shantanu protested breaking his word, Ganga leaves him by offering Bhishma to him.

Ardent devotees belonging to the Hindu community are known to take Bhishma Ashtami Snan, which falls on the eighth day of the Shukla Paksha of Magh month as per the Lunar calendar. People observe Bhishmashtami Fast on this very day as part of paying their tribute to King Bhishma. Perhaps, the king himself had chosen this day for his death after he was left on a bed of arrows by Arjun during the Mahabharata war. Bhishma, who was a Bal Bramhachari and an ancestor to Kauravas, he never married in his life and remained a bachelor throughout.

Bhishma’s birth name is was Devavrata. As he grew up, Ganga took him along with her to Daitya Guru Shukracharya to teach him all the skills needed. Eventually, he learnt the incomparable art of fighting because of which he earned the unique distinction of never getting defeated as long as he was waging a war in the battlefield. As time passed by, King Shantanu married Satyavati after getting enchanted by her beauty. However, she agreed to be his queen only on the condition that her son would be made king and not Bhishma. Shantanu agreed reluctantly to this on the insistence of Bhishma.

During the war phase in Mahabharata, he chose to take the sides of Kauravas and decided to fight against Pandavas against his will. Lord Krishna employs the tactic of pitting Shikandi against him as King Bhishma had pledged that he would never fight against a eunuch. Eventually, he was confined to the deathbed for a period of 18 days after he reached the divine abode. The day when he died is observed as Bhishma Ashtami. People consider this day important and prominent for practicing celibacy.

People who would like to get rid of the putradosh (lack of a child) find this day as the most significant one for sure. Childless couples and newly married couples who look forward to having a son consider this day to be most auspicious to observe vrat (fast). Performing a Tarpan on this day will eventually consummate the fast kept by people in this regard. Perhaps, it is considered for offering peace to Bhishma Pitamaha’s soul. It is widely believed that by seeking the blessings of Bhishma on the day, it is possible to have a male child who is equally capable of being a pitamaha himself.