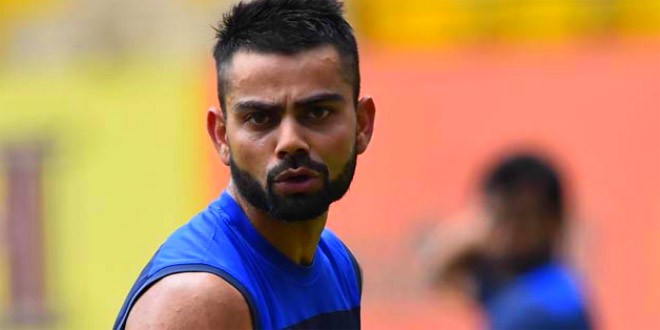 There’s a media gag on the Indian cricket players at the World Cup. They speak to members of the media only when they absolutely must. If they fail to do that, they face sanctions by the International Cricket Council (ICC).

But for the first time in the World Cup, an Indian player — Virat Kohli, no less — spoke to the press today when under no compulsion to do it. It turned out to be an ugly tirade full of the choicest curse words.

The incident occurred when Virat Kohli finished his batting session at the Murdoch University ground today. He came back to the dugout of the team, looked around, saw a certain journalist and something snapped. Kohli seemed to lose his mind at his sight, and started an unscheduled press briefing. This included horrible, filthiest curse words in Hindi, shouted from a distance of some 20 yards. The watchers were stunned by this sudden flow of abuse, and they began to wonder exactly what had gone wrong to make the vice-captain so angry. Kohli wagged his finger angrily and glared at the little group in which the concerned journalist was present.

The journalist heard the abuses but didn’t realise that he was the man at whom Kohli’s abuse was directed. Then someone informed him that it was he who was being showered with filthy words by Kohli. Kohli pointed towards him to confirm this, and was heard to shout: “Yes, you b*****d! You are here also.” Incredibly, Kohli continued this mindless abuse for 15 minutes, and the journalist was too stunned to react. Then, finally, Kohli stormed off.

Some 10 minutes later, Kohli was again at the door of the dressing room. This time he had a cheerful smile on his face, and he waved at the journalist. This hate-love aspect of the incident surprised and confused the journalist.

Kohli later sent an apology to this journalist through another journalist.

It was all quite simple, he explained. It was a case of mistaken identity. Kohli had mistaken this journalist for another one, who was not present at this ground.

Kohli was upset over an article that had appeared in a newspaper last year. The article was about the Indian team and its staff, and referred to the wives and girlfriends travelling with the players. Kohli has been angry due to this for many months. Today, when he thought he’d spotted the writer of the piece, he went completely mental.

Kohli spouted abuse for 15-odd minutes and no one tried to counsel him. It was later reported that the Indian team management, including team director Ravi Shastri, had spoken to Kohli about this incident. Shastri advised Kohli that as the future captain of the Indian team, he must learn to behave properly in public.

Share
Previous Why is a theatre screen called silver screen?
Next Choose colours, not chemicals this Holi