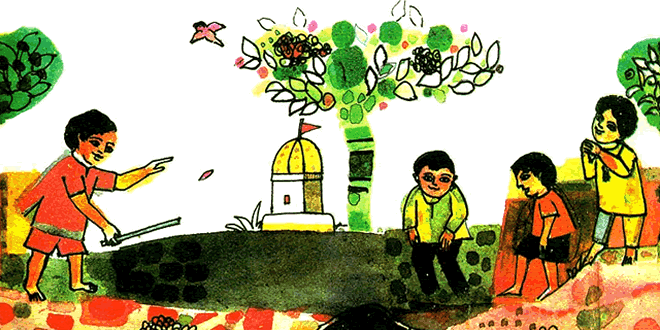 The second street game I vividly remember is Goli (also called ‘Kanchey‘). This is played with marbles. We used to break old soda-water bottles which had marbles in their necks. We could also buy beautiful many colored marbles from shops. I saw my eldest brother being beaten by Father, for spending too much of his time playing this game. So it was ‘forbidden fruit’ for me. But as I watched others I longed to join in.

Each player had to have a goli. On even ground, a little hole was then dug with the heel of the foot. Everyone took position about two yards away from the hole. Then they knelt and tried to send the marble into the hole. The marble was held tautly to the forefinger of the left hand. The finger was stretched back like a bow-string by the pressure of the forefinger of the right hand. When the finger was released the goli short forward, often overshooting the hole. And one had to strike out of the way the goli thrown by the other boys. Or, with a gentle blow from one’s goli, push the other goli, so that it drifted into the hole.

‘Ah goli mari!’ was the excited cry as one’s goli succeeded in striking the other fellow’s goli out of the way.

He would then wait his turn to strike the other boy’s goli. Whoever got all the golis into the hole first was the winner. This took a whole morning – or an afternoon. At the end of the game, there was always the danger of a big bully snatching all the golis of the smaller boys, unless the bully had won the game, which he usually did.

Goli required deft fingers. My hands and fingers were too podgy for me to ever be really good at this game. And, once or twice, when I did win four or five golis, they were snatched away by Chotta. I was too small to defend my golis and cried to Mother to buy me some more.