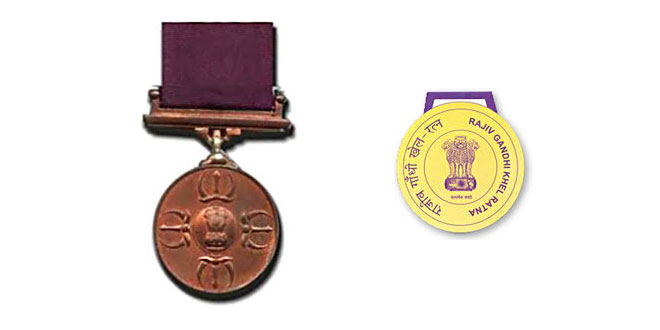 The Rajiv Gandhi Khel Ratna, officially known as Rajiv Gandhi Khel Ratna Award in Sports and Games, is the highest sporting honour of the Republic of India. The award is named after Rajiv Gandhi, former Prime Minister of India who served the office from 1984 to 1989. It is awarded annually by the Ministry of Youth Affairs and Sports. The recipient(s) is / are selected by a committee constituted by the Ministry and is honored for their “spectacular and most outstanding performance in the field of sports over a period of four years” at international level. As of 2017, the award comprises a medallion, a certificate, and a cash prize of ₹7.5 lakh (US$11,000).

The nominations for the award are received from all government recognized National Sports Federations, the Indian Olympic Association, the Sports Authority of India (SAI), the Sports Promotion and Control Boards, and the state and the union territory governments with not more than two eligible sports persons nominated for each sports discipline. In case of cricket, the nominations are received from the Board of Control for Cricket in India and SAI is authorized to submit the nominations on behalf of all the de-recognized or under suspension National Sports Federations. The previous award recipients can also nominate one sportsperson for the discipline for which they themselves were awarded. The Government can nominate up to two sports persons in deserving cases where no such nominations have been received from the nominating authorities. The nominations for a given year are accepted till 30 April or last working day of April.

All the received nominations are sent to SAI and National Anti-Doping Agency for the verification against the claimed achievements and doping clearance respectively. Any sportsperson who is either penalized or being enquired for usage of drugs or substances banned by the World Anti-Doping Agency is not eligible for the award. A committee consisting of the Joint Secretary and the Director / Deputy Secretary of Department of Sports, the Secretary and the Executive Director / Director (TEAMS) of SAI verify and validate the nominations.

The valid nominations are placed before the selection committee constituted by the Government. This twelve member committee consists of a Chairperson nominated by the Ministry, four Olympians or previous recipients of Rajiv Gandhi Khel Ratna or Arjuna Award, three sports journalists/experts/commentators, one sports person / expert / administrator associated with parasports, one sports administrator, the Director General of SAI, and the Joint Secretary of Department of Sports, with not more than one sportsperson from a particular discipline included in the committee. When instituted in 1991–92, the award was given for the performance by a sportsperson in a year. Based on the suggestions provided by 2014 award selection committee headed by Kapil Dev, the Ministry revised the criteria in February 2015 to consider the performance over a period of four years.

The medals won in various International championships and events of the disciplines which include Summer and Winter Olympic and Paralympics Games, Asian Games, and Commonwealth Games are given 80% weightage. The remaining 20% weightage is given to the profile and standard of the events. For any other games not included in Olympic, Asian Games, and Commonwealth Games like cricket and indigenous games, the individuals performance of a sportsperson is taken into consideration. The sportsperson with maximum points is given 80 marks. Rest of the sports persons are given marks in proportion to the maximum points. For team events, marks are given as per the strength of the team. Following are the points defined for medals at the given events:

Previous Who are Recipients of the Rajiv Gandhi National Sadbhavana Award?
Next Haleem: Eid Recipes For Students And Children