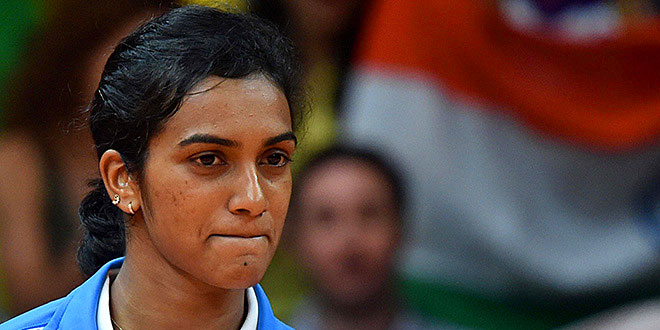 Sindhu, who became the toast of the country after becoming the first Indian women to win a silver at Rio Games, continued her rampaging run as she lifted the prestigious title after beating Sun 21-11 17-21 21-11 in the summit clash that lasted an hour and nine minutes.

World No. 11 Sindhu had come into the match with a 2-3 head-to-head record but then statistics counted little when she took the court at the Haixia Olympic Sports Center.

Sindhu dished out a dominating game as she zoomed to a healthy 11-5 lead early on.

Eventually it was a cross court return which earned Sindhu a massive 12 game points at 20-8. A couple of smashes on Sindhu’s forehand and backhand and a drop going to the net helped Sun save three points. But Sindhu sealed the opening encounter after dominating a parallel game and finishing it with a return that hit Sun’s face.

In the second game, Sindhu had a slender 6-3 lead which she extended to 11-7 and 14-10. But Sun soon broke the rhythm by mixing her strokes and coming up with steep and powerful body smashes to catch up with the Indian at 14-14.

A sharp smash and a superb return on Sindhu’s backhand helped Sun grab a 18-16 lead which became 19-16 after the Indian lost a video referral. At 20-16, Sun hit the nets but she roared back into contest when Sindhu’s stretched low return at the forecourt could not cross the net.