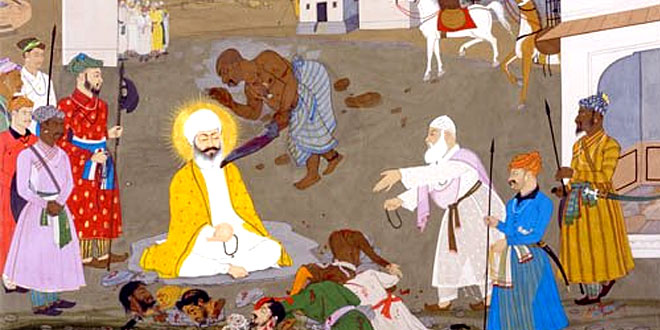 Of all the things, Guru Gobind Singh placed most reliance on religious faith. He taught his Sikhs and other people who met him, to face death and extermination in the cause of true faith. He told them to stand up and oppose the tyrants with all the might instead of bearing the tyranny. The defence of faith lies in standing up to tyranny. Real bliss can be enjoyed only by protection of faith. Nothing can be achieved without sacrifice.

In 1674 AD the governor of Kashmir, acting on the orders of the King Aurangzeb started converting Hindus to Islam, forcibly. Those who refused were punished, chastised and tortured. The poor and weak, obeying the orders of the governor started to adopt Islam. When the Brahmins of Kashmir saw no other way of saving their faith, they came to Anandpur led by Pandit Kirpa Ram and narrated their woes to Guru Tegh Bahadur. Pandit Kirpa Ram used to teach Sanskrit at one time to his son Gobind Rai and knew all about Guru Tegh Bahadur.

Guru Tegh Bahadur after giving deep thought told the complainants, “Faith can be saved if some great saint is ready to lay down his life to save it.” Prince Gobind Rai was also present in the court. Seeing a dead silence on all sides he pleaded, “Father! I do not see anyone greater than you who has the sufferings of the common man at his heart and who is ready to sacrifice himself for the sake of faith and righteousness.”

Guru Tegh Bahadur was very pleased to hear this counsel of his son. He was satisfied that Gobind Rai was capable to take up the seat of guidance founded by Guru Nanak. He said to the Brahmins from Kashmir, “Go back to Kashmir and tell your governor that Guru Tegh Bahadur is our religious leader. If you convert him to Islam we all shall follow him and become Muslims.”

On receiving the message of Guru Tegh Bahadur, Aurangzeb sent his soldiers to Anandpur to arrest the Guru. The Guru had already left for Delhi before the arrival of the soldiers. On his way to Delhi, the Guru wanted to familiarize his disciples with the barbarities committed by the ruler. The Guru was arrested at Agra and brought to Delhi. The Guru and the Sikhs accompanying him could not be convinced by arguments to become Muslims. To intimidate the Guru, they started martyring the Sikhs after torturing them in different ways. Still the Guru did not agree to become a Muslim. The Guru and the Sikhs remained firm in their faith. At last, the Guru was martyred on the 11th November 1675. After the martyrdom of the Guru, Aurangzeb was convinced that it was not possible to convert every Hindu to Islam by force.