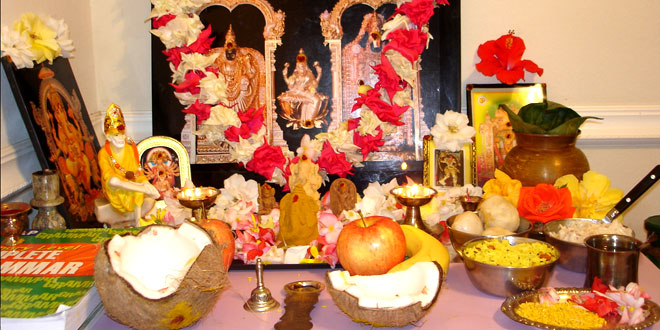 Why Hindus celebrate Ganesh Chaturthi? Ganesha Festival is a day on which Lord Ganesha, the son of Lord Shiva and Goddess Parvati, is believed to bestow his presence on earth for all his devotees. It is also known as Vinayaka Chaturthi or Vinayaka Chavithi in Sanskrit, Kannada, Tamil and Telugu, Chavath in Konkani and Chathaa in Nepali Bhasa.

It is celebrated as it is the birthday of Lord Ganesha. The festival is observed in the Hindu calendar month of Bhaadrapada, starting on the shukla chaturthi (fourth day of the waxing moon period). Typically, the day usually falls between 20 August and 15 September. The festival lasts for 10 days, ending on Anant Chaturdashi. This festival is observed in the lunar month of bhadrapada shukla paksha chathurthi madhyahana vyapini purvaviddha. If Chaturthi prevails on both days, the first day should be observed. Even if chaturthi prevails for complete duration of madhyahana on the second day, but if it prevails on previous day’s madhyahana period even for one ghatika (24 minutes) the previous day should be observed.

Ganesha, the elephant-headed son of Lord Shiva and Goddess Parvati, is widely worshiped as the supreme god of wisdom, prosperity and good fortune.

While celebrated all over India, it is most elaborate in Maharashtra, Goa (Biggest festival for Konkani people all over the world), Gujarat, Karnataka, Tamil Nadu and Andhra Pradesh, and other areas which were former states of the Maratha Empire. Outside India, it is celebrated widely in Nepal which was only Hindu Kingdom in the world and Tamil Hindus in Sri Lanka.