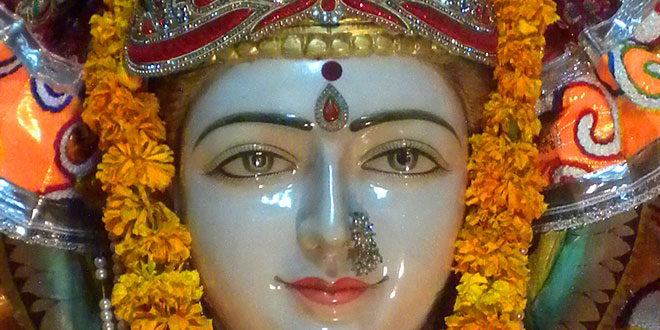 As ‘Diwali‘ – the festival of light – is to Lakshmi, goddess of wealth and prosperity, and ‘Navaratri’ is to Durga, goddess of power and valor, Vasant Panchami is to Saraswati, the goddess of knowledge and arts. This festival is celebrated every year on the 5th day or ‘Panchami’ of the bright fortnight of the lunar month of Magha, which falls during January-February. ‘Vasant’ comes from the word ‘spring’ as this festival heralds the beginning of the spring season.

It is believed that on this day Goddess Saraswati was born. Hindus celebrate Vasant Panchami with great fervor in temples, homes and even schools and colleges. Saraswati’s favorite color white assumes special significance on this day. Statues of the goddess are dressed in white clothes and are worshiped by devotees adorning white garments. Saraswati is offered sweets which are given away as ‘prasad’ to all people attending the ritual worship. There is also a custom of ancestor worship, known as ‘Pitri-Tarpan’ in many parts of India during Vasant Panchami.

The Foundation of Education:

The most significant aspect of Vasant Panchami is that it is also the most auspicious day to begin laying one’s foundations of education – of how to read and write. Pre-school children are given their first lesson in reading and writing on this day. All Hindu educational institutions conduct special prayer for Saraswati on this day. It is also a great day to inaugurate training institutes and new schools – a trend made famous by the renowned Indian educationist Pandit Madan Mohan Malaviya (1861-1946), who founded the Banaras Hindu University on Vasant Panchami day in 1916.

During Vasant Panchami, the advent of spring is felt in the air as the season undergoes change. New leaves and blossoms appear in the trees with the promise of new life and hope. Vasant Panchami also announces the arrival of another big springtime event in the Hindu calendar – Holi, the festival of colors.

“May Goddess Saraswati,
who is fair like the jasmine-colored moon,
and whose pure white garland is like frosty dew drops;
who is adorned in radiant white attire,
on whose beautiful arm rests the veena,
and whose throne is a white lotus;
who is surrounded and respected by the Gods, protect me.
May you fully remove my lethargy, sluggishness, and ignorance.”