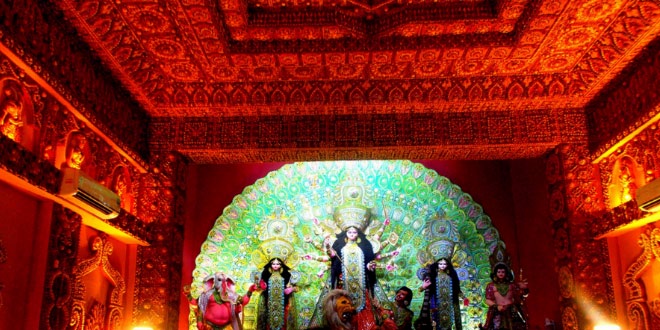 A Durga Puja that is over 500 years old and is sponsored by the Tripura government continues to be a draw for devotees in northeast India as the royal family has kept its traditional sanctity.

Tripura, the northeastern state currently ruled by the Left Front led by the Communist Party of India-Marxist, is possibly the only one in India where the government continues to sponsor a over five century-old Durga Puja, that is also closely overseen by the erstwhile royal family.

With ‘Maha Sasthi’ or ‘Bodhan’ – the welcoming of the Durga idols – the five-day long Puja began on Monday at the famed Durgabari temple, located in front of the 114-year-old Ujjayanta Palace, eastern India‘s biggest royal mansion.

“A few years after the beginning of the royal era in Tripura, the erstwhile kings started Durga Puja over 500 years ago,” Dulal Bhattacharjee, the octogenarian chief priest of Durgabari temple, told.

He said: “The capital of the princely dynasty along with royal temple moved three different places – Udaipur, Amarpur and Puran Habeli before the state headquarters and the capital city along with the Durgabari temple settled in Agartala 177 years ago in 1838 by then Maharaja Krishna Kishore Manikya (1830-49).”

“The district magistrate of West Tripura earlier has to report in writing about the preparations at Durgabari to the former royal family and submit a final report after completion of the mega puja,” Bhattacharjee said.

“Now this practice has been slightly modified. However, every affair of the Dura Puja is approved by surviving elderly royal family member, Maharani Bibhu Kumari Devi,” he addeed.

Bhattacharjee has been getting Rs.6,000 as monthly honourium from the state government as chief priest of Durgabari temple.

Bhattacharjee, who is associated with the Durga Puja for more than 60 years, said it is on the final day of Dashami that the real splendor of the festival unfolds.

“The idols of Durgabari that lead the Dashami procession are the first to be immersed at Dashamighat here with full state honours, with the state police band playing the national song.”

As Bhattacharjee aged and became sick, his son Jayanta managed all traditional rituals of the puja. “The state government like in previous years has sanctioned Rs. 3 lakh this year for the Durga Puja at this royal temple,” said junior Bhattacharjee.

Historian and writer Panna Lal Roy told: “Tripura is the only Indian state where the state government, be it of the Left or non-Left parties, is at the forefront of funding such a Hindu puja. The tradition has been going on since Tripura’s merger with the Indian union and has been on during Communist rule in the state as well.”

A part of the fortress and royal mansion continues to be the abode of the former princely family and the remaining palace served as the Tripura assembly till 2009. It has now been turned into eastern India‘s biggest museum conserving the history, life and culture of northeast India.

At the end of 517-year rule by 184 kings, on October 15, 1949, the erstwhile princely state came under the administrative control of the Indian government after a merger agreement signed between Kanchan Prabha Devi, then regent maharani, and the Indian governor general.

The merger agreement made it mandatory for the Tripura government to continue the sponsorship of temples run by the Hindu princely rulers. This continues even six-and-half decades after Independence.

A full-fledged division – Debarchan Vibhag – under district magistrates in four of Tripura’s eight districts now bears this responsibility and the entire expenditure of eight temples, including that of Durgabari, is met by the government.

“Before starting the five-day long worship of Durga and her four children, a procession led by the head priest, escorted by Tripura Police, goes to the palace to seek the consent of the former royal family to begin the puja of the deities at Durgabari,” said an official of the west Tripura district administration.

“A young buffalo, several goats and pigeons are sacrificed during the five-day festival at Durgabari in the presence of thousands of devotees – all at government expense,” the official told.

People For Animals (PFA) chairperson Maneka Gandhi, currently union minister of women and child development, in a letter to the district magistrates earlier asked them to stop “cruel killing of animals in the temples” during religious festivities.

Historian Roy, who wrote many books on the royal era, said: “The Durga Puja in Durabari temple is unique in the sense that the prasad (holy offering) includes meat, fish, eggs and, of course, fruits.”

Though at least 2,500 community and about 100 family Durga Pujas are being held in Tripura, the Durga Puja at the Durgabari temple remains the main attraction for numerous reasons, including for its centuries old customs, kept alive by the royal family.

Traditional themes, prevailing issues and events continue to dominate puja pandals in the state with historical events forming part of the themes for decorations.

“Unlike in the past, there are no reports about extremists creating problems or asking people not to organize the puja. The number of Durga Pujas has also increased in rural and remote areas,” Tripura’s Inspector General of Police Nepal Das told.