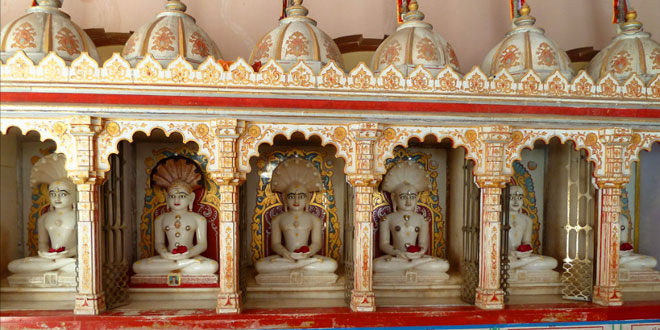 In Jainism, a Tirthankara is a human being who helps in achieving liberation and enlightenment as an “Arihant” by destroying their soul-constraining (ghati) karmas, became a role-model and leader for those seeking spiritual guidance. Tirthankaras revitalize Jain Society by organisation of fourfold Jain Order consisting of monks, nuns, laymen and laywomen. Not all Arihants can become Tirthankaras. There are twenty-four Tirthankara in this time era who revitalized the Jain Order.

Tirthankara is also said to mean “full moon,” a metaphorical reference to Kevala Jnana, the spiritual state achieved by exalted and rare beings. Keval Gnan is a state of permanent, perpetual, absolute knowledge of the Soul; it is the precursor to moksha, final liberation from samsara, the cycle of birth and death.

Jain scriptures define the term tirthankara as follows: the contrivance which help us to cross the great ocean of worldly life is called Tirtha and the person who makes that tirtha is known as tirthankara.

Tirthankara religious teaching form the basis for Jain canons. The inner knowledge of Tirthankara is perfect and identical in every respect and their teachings do not contradict one another. However, the degree of elaboration varies according to the spiritual advancement and purity of the society during their period of leadership. The higher the spiritual advancement and purity of mind of the society, the lower the elaboration required.

While Tirthankaras are documented and revered by those of Jain faith, their grace is said to be available to living beings, regardless of religious orientation.

Tirthankaras dwell exclusively within the realm of their Soul, and are entirely free of kashayas, inner passions, and personal desires. As a result of this, unlimited siddhis, spiritual powers, are readily available to them – which they use exclusively for the spiritual elevation of living beings. Through their darshan, divine vision, and deshna, divine speech, they grant their own state of Keval Gnan, and moksha, final liberation to anyone seeking it sincerely.

At the end of his human life-span, a Tirthankara achieves siddha status, ending the cycle of infinite births and deaths.