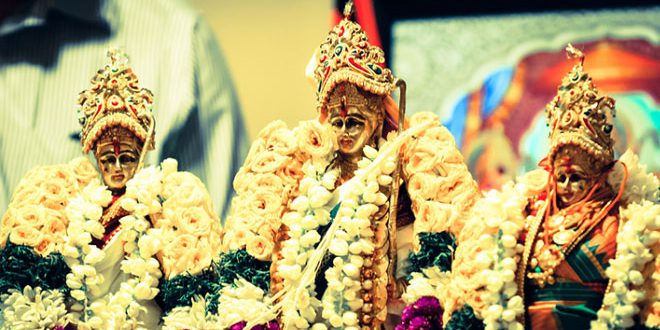 Rama Navami Celebrations: Rama Navami is a Hindu festival celebrated with fun and religious fervor by Hindus across different parts of India. The festival commemorates the birth of Lord Rama, one of the most worshiped Hindu Gods. He is regarded as the epitome of humankind, the ideal son, husband and father. Every year, Rama Navami falls on the ninth day of the Chaitra month of Hindu lunar year in ‘Shukla paksha‘ or waxing moon, which corresponds to March-April as per the Gregorian calendar. The celebrations of the festival are marked by stringent fasting by the devotees of Lord Rama. The festival marks the end of the nine-day festivities of Chaitra Navratri.

The celebrations of Rama Navami start with the worship of Sun God. On the day, people wake up early in the morning, take bath and pay honors to Sun God. Thereafter, they would chant mantras of Lord Rama and offers fruits and flowers to the deity. The devotees of Lord Rama would observe a whole-day fast on the festival, which they would break only in the midnight, by eating a fruit. In many parts of India, satsangs are organized by cultural committees to commemorate the birth of Lord Rama. The congregation of the devotees would sing bhajans, chant mantras in the praise of the God and listen to the legendary stories.

As a part of the celebrations, people would keep their home clean and decorate it beautifully. In the households where pujas are conducted, the pictures of Lord Rama, his wife Sita and brother Lakshman are hung. The devotees would offer flowers, burn dhoop and incense sticks. A thali used for the performance of the pooja would typically contain prasad and other items necessary for the ritual, including roli (sacred tilak), rice, lota (container filled with water), flowers, a bell, earthen lamp or deep and a conch. Everyone in a family takes part in the puja, which is conducted by the elderly member of the family. While worshiping the deity, songs are sung. When the puja is over, prasad is distributed among all the people gathered for the worship of Lord Rama.

In many parts of India, typically South India, small idols of Lord Rama and Sita are worshiped in the households, which are take to a procession on the streets, in the evening. In many temples, Kalyanam’ (a ceremonial wedding) is performed by the temple priests. Panakam, a sweet drink prepared by mixing jaggery with ginger and pepper, is a specialty of Rama Navami in southern parts of India. The dish is prepared as a prasad. It is first offered to the deity, and then distributed amongst the devotees. When the idols of the deity are taken to a procession, the devotees often play with water and colors, to mark the birth of the God.