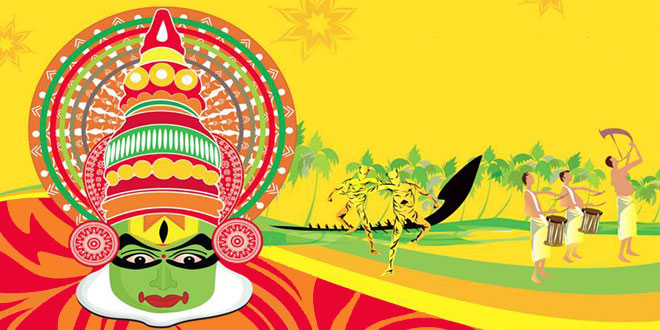 Onam – the festival of harvest – is celebrated with high spirits and enthusiasm in Kerala (Indian State) and the Malayalees all over the world. The air is filled with festivity, which starts from Attam (the first day of the festival) and lasts until the culmination of the festival. Many days prior to the festival, the people indulge themselves in preparations for welcoming their Maharaja Mahabali, who, according to a legend, visits them every year on the occasion of Onam, to enquire about their well-being. Apart from the legend of Mahabali, a number of stories are connected to the harvest festival. In this article, we have given information on Onam legends.

Once upon a time, there lived a benevolent and mighty Asura (demon) king Mahabali, the grandson of Prahlada. Mahabali was the ruler of Kerala. His people were happy to have him as the king and there was no sorrow, poverty, disease or premature death in his kingdom. Afraid of his rising popularity, the ever-jealous gods approached Lord Vishnu, with a request to put an end to his rule. Counting on his charitable nature, Vishnu disguised himself as a Brahmin dwarf called ‘Vamana‘ and sought three steps of land from Mahabali. However, Vishnu then increased his size to cosmic proportions and covered the entire earth in one step and the entire heaven in the second. When he asked Mahabali, where to place his third step, he humbly offered his head to the divine deity. Pleased with his virtues, Vishnu made him the king of hell and granted a boon to him that he could visit his kingdom once a year. Thus, Onam is celebrated to welcome the legendary king returning annually to his earthly abode and kingdom.

Once when some men were sailing on a boat called ‘Palliodam’, which was laden with food, it got stuck in the narrow turning of the river. The head oarsmen called Bhattathiripad set out to seek help from the hut near the river. However, when he reached there, he found a poor widow and her children weeping because of hunger and poverty. The kind-hearted man took some food from his boat and gave it to them. As soon as it was done, the boat could be easily maneuvered to the main course of river again. Since that day, it has become a tradition to feed a poor person at least on the day of Onam.

Once upon a time, the head of Katoor Mana, the Nambuditi Brahmin family, was bathing on the near Aranmulla in river Pampa. After offering prayers to the Gods, he was waiting for a poor man to feed, to complete his religious duties. While waiting, he started praying to Lord Krishna. After some time, he saw a poor boy in rags standing before him. The Brahmin lovingly gave him a bath, dressed him and fed him well. However, it is said that the boy disappeared after eating and could be found nowhere. He spotted the boy near the Aranmulla Temple, just to lose him again. Brahmin concluded the boy to be the God himself and since then, Nambudiri Brahmins offer food to the deity in Aranmulla Temple on Onam, every year.