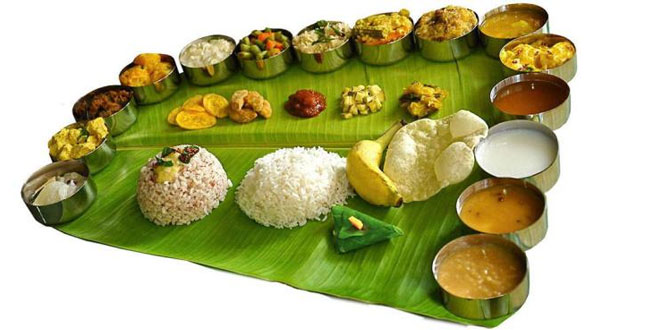 Onam, the state festival of Kerala (India), is celebrated with great fanfare, by the Malayalees all over the world. While Thiruvonam (the tenth day) is the important day of the festival, the celebrations continue until chatayam, in many parts of the state. A number of rituals are followed during the festival. Although the rituals of Onam are purely Hindu, there is a tradition that is followed by people, irrespective of their cast and religion. It is the lavish Onam feast. ‘Onasadya’ or the traditional feast of Onam is an inevitable part of the festival. There is an old saying in Malayalam – ‘Kanam Vittu Onam Unnanam‘, which literally means that men go to the extend of selling their possessions to eat Onasadya on Thiruvonam. Learn more about Onam feast in the following lines:

Rice as its main course of Onasadya, a strictly vegetarian feast, which is accompanied by a variety of side dishes including as curries, uppaeries (dishes made of vegetables), pappadam (round crisp flour cake), uppilittathu / achaar (pickle) and pradhaman (pudding), arranged in a definite order and laid in a particular way. The feast is served on banana leaf. Traditionally, at least eleven side dishes are served in the feast. The number can go up to 13 or even 15 items.

There is no concept of spoon or fork in Onasadya, because the food is eaten with hands. A specific way of serving the dishes is followed. All the curries are served first and then rice is added. First, the rice is eaten with parippu (dal) and neyyu (clarified butter) then with sambar, followed by rasam. Thereafter, two kinds of payasam (popularly known as pradhaman) are served. Finally, the rice is served with moru (spiced buttermilk).

Salt and chilies are added to raw plantains and yams sliced and boiled in water to make Erissery. One can also boil pulp of the coconut grounded with a little cumin seed. Later, a few mustard seeds along with scraped coconut pulp are fried in coconut oil and added to it for the flavor.

Salt and chilies are added to raw banana known as nenthra-kaya and yams are sliced and boiled in water. The main ingredient of kalan is hung curd, which is mixed with ground coconut pulp and poured in proper time in the mixture. Mustard seeds fried in coconut oil are added for flavor.

Although the ingredients may vary from region to region, pumpkin and French beans are generally preferred for making Olan for Onasadya. The pumpkin and French beans are cooked in water, green chilies and salt. Fresh coconut milk is poured onto the mixture and then it is given a boil. After it is boiled on simmer, kariveppila (curry leaves) and fresh coconut oil are added for flavor.

All types of vegetables are boiled in water with salt and chilies. Tamarind and well grounded coconut pulp are added to the mixture, in proper time. Fresh coconut oil is poured at the end of the preparation and kariveppila (curry leaves) are added for flavor. Depending upon their taste, people may include or exclude Turmeric powder from the avial recipe.

For preparing thoran, green beans, cabbage or beetroot can be used. The vegetable is sliced into tiny bits and then boiled in water, with salt and red or green chilies, until all the water evaporates. Later, a few mustard seeds along with scraped coconut pulp are fried in coconut oil and then added to it for the flavor.