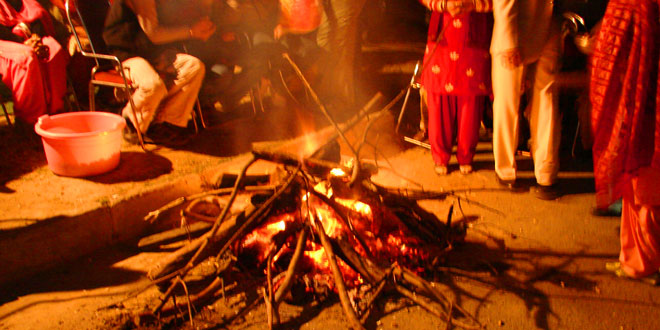 The harvest festival of Lohri is being celebrated with traditional fervor and enthusiasm in most parts of North India today.

Lohri is a popular festival celebrated by the people of Punjab, particularly of the Sikh and Hindu faiths.

The origins of Lohri are many and it is primarily linked to the Punjab region of the Indian subcontinent.

Many people believe the festival was originally celebrated on the day of the Winter Solstice, being the shortest day and the longest night of the year.

Historically, there are many origins of Lohri: all forming part of folklore. However, the main theme of Lohri is the belief that Lohri is the cultural celebration of the Winter Solstice.

A key feature of Lohri is the bonfire. Lighting of the fire has been common in Winter Solstice festivals throughout time and the world. It signifies the return of longer days. For some the bonfire has a religious meaning, a remnant of ancient origins, perhaps? For others, the bonfire is no more than a tradition.

Going forward, instead of celebrating Lohri on the day of the Winter Solstice, Punjabis celebrate it on the last day of the month during which the Winter Solstice takes place. This is due to the linking of Lohri to the Bikrami calendar and the twinning of the festival with Makar Sankranti.

However, scientifically, the shortest day of the year is around December 21 – 22 after which the days begin to get longer.

Punjabis, irrespective of their religion, continue to practice their folk religion. Respect to the seasons and the natural elements of fire, wind, water and the earth is very important. Lohri is a festival dedicated to the end of the Winter season whereas Teej (known as Teeyan in Punjabi) is dedicated to the rain / Monsoon season and Basant is dedicated to the Spring season.

Lohri is traditionally associated with the harvest of Rabi crops. People take peanuts, rewri, flour, butter and various food items to places of religious worship to thank God for a good harvest.

Farmers in Punjab see the day after Lohri as the financial new year. It is a very important day.