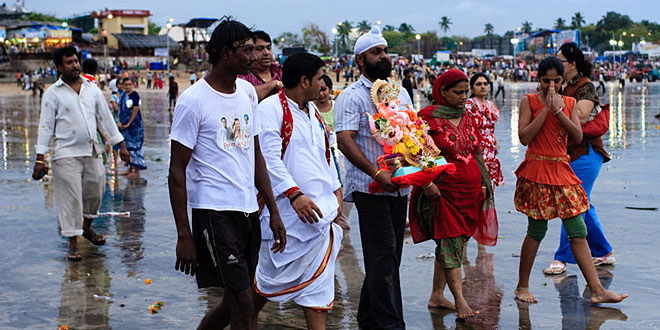 The ‘aarti’ and ‘sthapan puja’ (devotional worship) were held in various pandals (associations) to mark the birthday of Lord Ganesh, the son of Lord Shiva and Goddess Parvati.

Millions of Mumbaikars remained awake through the night making last minute preparations for the installation of gigantic, medium and small idols of Lord Ganesh in different public venues, housing complexes and homes.

Since last week, over 300,000 big and small idols started arriving in the city from artists’ studios in different parts of Mumbai and Raigad.

Over 12,500 registered associations, apart from the 40,000 private housing complexes, have been preparing for the past few weeks for the popular festival.

While a majority of the gigantic idols were installed last week in different marquees to enable decoration before being unveiled Wednesday, the small idols started arriving since Tuesday evening.

Some of the public mandals have erected the idols with thematic presentations replicating the likes of famous Dilwara temple of Rajasthan, Nepal‘s Pashupatinath temple or Bikaner’s Laxmi Vilas Palace.