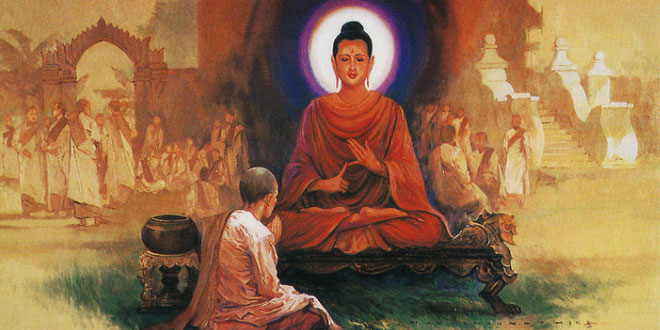 The three most significant events in the life of Gautam Buddha occurred on the same day. His birth, enlightenment and death (nirvana), all happened on a full moon night in April / May. This makes the day – called Buddha Purnima or Buddha Jayanti – all the more sacred for Buddhists. Below we have provided a brief biography of Gautam Buddha.

The Buddha was born Siddhartha Gautama in 544 BC, to King Shuddhodhana and Queen Mayadevi, rulers of Lumbini, Nepal. According to legend, Siddhartha’s wife Yashodhara, his charioteer Channa, his disciple Ananda and his horse Kantaka were also born on Buddha Purnima day. The Buddha or the Enlightened One was also known as Shakyamuni because he belonged to the Shakya clan, while his family name was Gautama.

The Queen died shortly after his birth and the Queen’s younger sister, Maha Pajapati Gotami, who was also married to the King, adopted the child while entrusting her own son, Nanda, to the care of the nurses.

One night, Queen Mayadevi dreamed that a white elephant descended from heaven and entered her womb. The white elephant entering her womb indicated that on that very night she had conceived a child who was a pure and powerful being. The elephant’s descending from heaven indicated that her child came from Tushita heaven, the Pure Land of Buddha Maitreya. Later, when she gave birth to the child, instead of experiencing pain the queen experienced a special, pure vision in which she stood holding the branch of a tree with her right hand while the gods Brahma and Indra took the child painlessly from her side. They then proceeded to honor the infant by offering him ritual ablutions.

On the fifth day after the prince’s birth he was named Siddhattha which means “wish fulfilled”. His family name was Gotama. His Father invited a brahmin to make predictions about the prince’s future. The brahmin prophecied that Siddhartha will get disillusioned with the material world and would venture out as a sage in search of wisdom to overcome suffering and misery from the world. Fearing that the prophecy might come true, King Suddhodana brought up his son in immense luxury ans a world devoid of sorrow, thinking that this divert Gautam’s mind from misery and sorrow.

As a Prince, Siddharta received royal education. He also received special training in the art of warfare. At the early age of sixteen, he married his beautiful cousin of equal age, Princess Yasodhara. For nearly thirteen years, after his happy marriage, he led a luxurious life, blissfully ignorant of the vicissitudes of life outside the palace gates. With the march of time, truth gradually dawned upon him. His contemplative nature and boundless compassion did not permit him to spend his time in the mere enjoyment of the fleeting pleasures of the Royal palace.

But fate had something else in store for him. One day, he convinced his charioteer to take him outside the walls of his palace and he was shocked to see the sight of an old man, a cripple, and a corpse. He had no personal grief but he felt deep pity for suffering humanity. Amidst comfort and prosperity, he realized the universality of sorrow.

The realization that there was more to life than the lavish and luxurious life he was leading, made him abandon all the worldly pleasures and search for enlightenment and the true meaning of life. Gradual disenchantment with worldly pleasures compelled him to leave his beautiful wife Yashodhara and son in the middle of the night to lead the life of a mendicant.

Gautam went from one religious center to another and from one hermitage to the next seeking in vain answers to his questions. Finally in a forest at the edge of the river Niranjana near Gaya, Gautam practiced meditation and penance for six years yet nothing happened. He then realized that enlightenment could not come through mortifying the flesh. In the memorable forenoon, immediately preceding the morn of His Enlightenment, as the Bodhisatta was seated under the Ajapala banyan tree in close proximity to the Bodhi tree, a generous lady, named Sujata, unexpectedly offered Him some rich milkrice, specially prepared by her with great care. This substantial meal he ate, and after His Enlightenment the Buddha fasted for seven weeks, and spent a quiet time, in deep contemplation, under the Bodhi tree and in its neighborhood.

After 49 days of intense meditation under the Bodhi Tree in Bodhgaya near Benaras he attained enlightenment. After he became the Enlightened One, he preached the sermon of the Middle Path, which shows the way to a balanced and harmonious life. The famous sermon was held at the Deer Park in Sarnath.

Buddha traveled far and wide to preach his teachings. His day was divided between itinerant preaching in the morning and receiving visitors for discussion at night, with the afternoons reserved for private meditation. He gathered a number of followers. He was strongly opposed by the Brahmins for teaching that gifts to the Buddhist order were of more merit than the sacrifices, which Hindus practiced.

Buddha died of an illness brought on by some error in diet. He became ill through eating Sukara-maddavam, prepared for him by a lady adherent named Cundo.