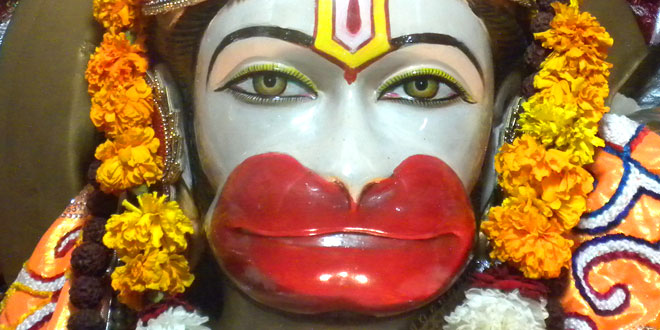 Hanuman ji is considered as the incarnation of Lord Shiva. Shri Hanuman is one of the popular gods of the Hindu religion and is worshiped all over the world. Life of Hanuman is a legend in itself, for his immeasurable love towards his Prabhu Ram. Here, are some stories of Sri Hanuman’s life that shows his supreme devotion for Lord Rama.

Hanuman is a supreme devotee of Sri Rama. Many incidents of Hanuman’s life acclaim this love. This is one interesting story which confirms the deep love of Hanuman for Lord Rama. Once when Sita ji (Consort of Lord Rama) was applying sindoora (Vermilion) to her hair, Hanuman asked her the reason for doing so. She replied that by applying sindoora, she ensured a long life for her husband. The more sindoora she applied, the longer Rama’s life would be. The devoted Hanuman then smeared his entire body with sindoora, in an effort to ensure Rama’s immortality.

Hanuman and His Love for Eating

Here is one more interesting story of Hanuman depicting the regard and dedication towards the Lord Rama. Once Sita ji invited Hanuman for a lunch and especially which was cooked by her. Sita ji made many delicacies for the lunch, which was to be attended by Hanuman. Hanuman ji came and started eating the food served to him. He ate the whole food which was made in the kitchen. Sita ji quickly made more delicacies in order to satisfy the hunger of Hanuman. Hanuman ate that too and asked for more. Again, Sita ji cooked some more food and again it got finished in seconds.

The condition was that nothing was left in the kitchen to cook. Sita ji got tensed and thought to ask lord Rama about the situation. She conveyed the whole scene to Rama. Rama asked Sita ji to give a Tulsi-dal (a leaf of Tulsi) to Hanuman and her problem would be solved. Sita ji did the same and Hanuman’s appetite got satisfied. This shows that the words of Lord Rama are inevitable for Hanuman.

Previous How did Hanuman served Lord Rama?
Next Lord Hanuman Quiz For Students And Children