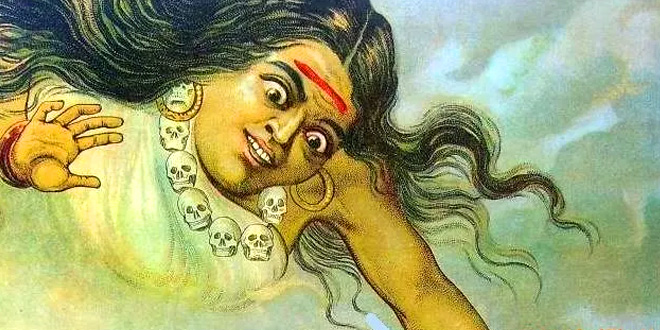 Legend of Holi: Dhundhi The Ogress

It is believed that there was once an Ogress called Dhundhi in the kingdom of Prithu (or Raghu). The female monster used to specially trouble little children who became fed-up of her. Dhundhi, had a boon from Lord Shiva that she would not be killed by gods, men nor suffer from arms nor from heat, cold or rain. These boons which made her almost invincible but she also had a weak point. She was also cursed by Lord Shiva that she would be in danger from boys going about crazy. Deeply troubled by the Ogress, the King of Raghu consulted his priest.

Giving the solution, the priest said that on Phalguna 15, the season of cold vanishes and summer starts.  Boys with bits of wood in their hands may go out of their house, collect a heap of wood and grass, set it on fire with mantras, clap their hands, go around the fire thrice, laugh, sing and by their noise, laughter and homa, the ogress would die.

The legend has it that on the day of Holi, village boys displayed their united might and chased Dhundhi away by a blitzkrieg of shouts, abuses and pranks. It is for this reason that young boys are allowed to use rude words on the day of Holi without anybody taking offence. Children also take great pleasure in burning Holika.

Previous Holi in Maharashtra: Shimga or Rangpanchami
Next What is Holi Origin?