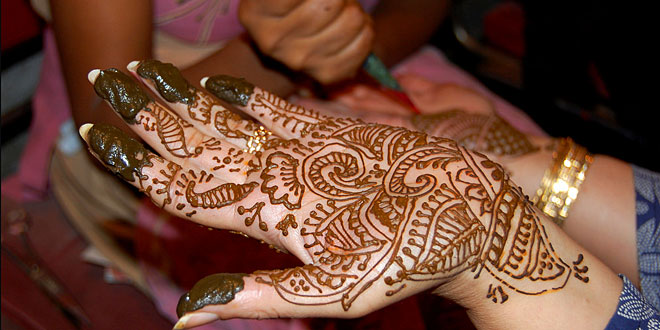 Karwa Chauth is an important festival for married women, dedicated to their husband’s long life and prosperity. The rituals start one day before the festival, when the mother-in-law gives ‘sargi’ to her daughter-in-law. Sargi consist of mehndi, sindoor, bindi, red ribbon, coconut, saviya, sweets, almonds, etc. Henna or mehndi forms an important part of Karva Chauth and applying it on hands and feet is considered to be auspicious for married women. It is also said that the darker the color of mehndi is, the more love and care a woman will get from her husband.

Karwa chauth is one of the occasions when the henna business is at its peak. There are various ways of applying henna paste. On this day, each and every married woman gets henna designs made on her hands and, in some cases, feet as well. The women use toothpick or cones for the purpose, according to their convenience. Using cone is the best method, as they are disposable, less messy and inexpensive too. The best part is that these cones can be easily made at home, by following simple steps. If you want to explore the process of making cones as well as applying mehndi, check out the following lines.

How To Apply Karwa Chauth Mehndi