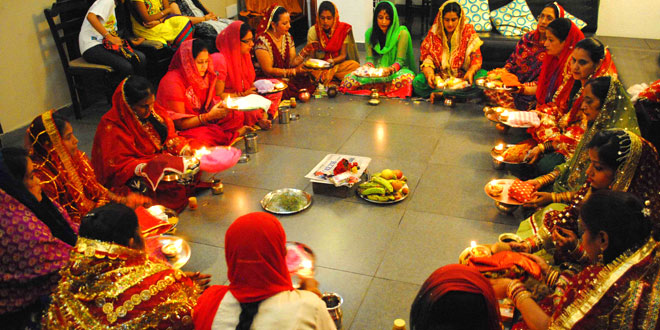 Karwa Chauth is celebrated with gusto by Hindu married women in the north and north western parts of India. It is a special day for them, because they pray for the longevity of their husband and seek blessings of Goddess Gauri to have a blissful married life. Special puja is conducted in the evening by the married women, wherein katha – story or legend associated with the celebration of the festival – is narrated by the elderly woman of the group. After watching the moon rise, the women would have a glimpse of their husband through the same sieve, which they used to watch the moon. Thereafter, they would break their fast by drinking water. In the article, we have given information on Karva Chauth ki kahani.

Once upon a time, there lived a beautiful princess named Veeravati. She was married to a king at the optimum marriageable age. After tying the wedding knot, she went to meet her parents on Karva Chauth. After sunrise, she observed a very stringent fast on the day, when she didn’t drink even a drop of water. Since Veeravati was too delicate to withstand rigorous fasting, she fainted in the evening. The seven beloved brothers of the queen couldn’t stand the dilemma of their sister and decided to break her fast, by deceiving her. They made a fire at the nearby hill and asked her to catch a glimpse of the glow. They made her to believe that it was the glow of the moonlight and now that moon had risen, she could break her fast.

After watching the false moon, Veeravati broke her fast and ate dinner. The moment she ate her food, she received the bad news that her husband was no more. The heartbroken queen rushed to the palace to see her deceased husband. On her way to the palace, she came across Lord Shiva and his significant half – Goddess Parvati (also known as Ma Gauri). Parvati informed Veeravati that the king had died because she had broker her fast by watching a false moon. When the queen asked for mercy, the Goddess granted her the boon that the king would be brought back to life, but would be severely ill.

When the queen reached the palace, she found her husband lying unconscious, with hundreds of sharp needles pierced into his body. Each day, the queen was capable of removing one needle from the king’s body. She could remove all the needles except one. By the time, it was next year, on the day of Karva Chauth. The king was still unconscious, with only one needle remaining inserted in his body. On the day, the queen once again observed a stringent fast and went to the market to purchase the karva (pitcher) for the puja. When she was away from the palace to fetch the karva, her maid removed the last needle from the king’s body.

The moment Veeravati’s maid removed the last needle from the king’s body, the king regained consciousness. Ironically, he mistook the maid for his queen. When the real queen returned to the palace, she was made to serve as a maid. Nonetheless, Veeravati was true to her faith and continued to observe the Karwa Chauth vrat. One fine day, when king was going to other kingdom, he asked Veeravati (now turned maid) if she wanted anything. She asked to fetch a pair of identical dolls. While the king was obliged to bring her a pair of dolls, the queen kept singing a song “Roli ki Goli ho gayi.. Goli ki Roli ho gayi” (the queen has turned into maid and the maid has turned into queen).

When asked why she was repeatedly singing the song, she narrated the entire story. The king regretted and wanted to do good for his queen. Consequently, he restored the royal status to Veeravati. It is believed that her immense faith in the Almighty, her love and dedication to her husband had won her husband’s affection and the blessings of Goddess Parvati. This is the reason why, every year, Karwa Chauth is celebrated to commemorate the sacrifice and dedication of Veeravati. Every year, on Kartik ki Chauth, married women observe stringent fast, worship Goddess Parvati for a long and pleasurable married life and pray for longevity of their husband.