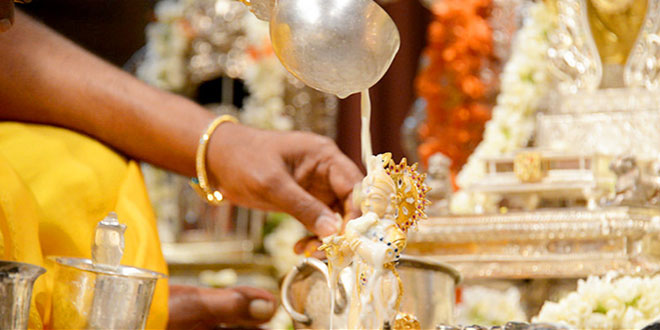 Janmashtami is celebrated to commemorate the birth of Lord Krishna, who is considered the savior of humanity. The deity is worshiped for his extraordinary powers and unique charm. Lord Krishna, an avatar of Lord Vishnu, took birth in the Dwapar Yug at the captivity of the demon King Kansa. According to the legends, Lord Krishna was born as the son of Devki (Kansa’s sister) and Vasudev. Krishna was destined to kill Kansa and other demons and restore peace in the world. Born in Mathura (Uttar Pradesh, India), Krishna was brought up in Gokul, as the son of Nand and Yashoda. The small child was lovable brat, who wandered around with Gopis of the little town of Gokul. He spent his formative years in Vrindavan. Go through the following lines to know more about Janmashtami in Vrindavan.

Vrindavan is one of the famous places of pilgrimage in North India. Located 15 km away from Mathura (the birthplace of Lord Krishna), Vrindavan is at its best on the auspicious occasion of Janmashtami. The place is location for as many as 5000 Hindu temples, both ancient and modern. The holy town of Vrindavan is situated along the banks of River Yamuna. It is significance in the history of Janmashtami, because Lord Krishna performed the rasleelas with his beloved Gopis at the place. On the auspicious occasion of Krishna Janmashtami, Vrindavan is filled with devotees who visit the place from the nook and corner of India, to offer prayers to their lovable deity – Lord Krishna.

The sound of bhajans and mantras echoes in Vrindavan, on the festive occasion of Janmashtami. There, people start celebrating some seven to ten days prior to the exact date of the festival, because such is the influence of the place. Various plays are staged at different places in the town. Professional artists are called upon to give their best performance on the festive season, so that they are showered the blessings of Lord Krishna. Excerpts from the story of Janmashtami are depicted in the dramas, which are conducted all through the festive season.

Some of the important temples of Vrindavan, which are visited during Janmashtami in Vrindavan, include Banke Bihari Temple, Rangnathji Temple, Shri krishna Balram Temple, Radharaman Temple and ISCKON Temple. The timings are fixed for various ceremonies and pujas that are conducted all through the day, in the temples on the occasion of Janmashtami. One of the important rituals of the temples is Abhishek (holy bath) during which darshans are open for the devotees. Most of the devotees who visit the temples to seek the blessings of Lord Krishna would have kept fast for the entire day and would break it only at the midnight, after the special Janmashtami puja.