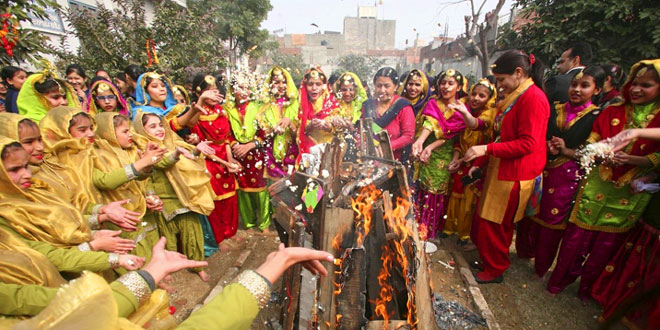 Lohri is one such festival which works as a tie-up bond for various communities. The festival is celebrated with great fervor and exuberance especially in North India. Farmers celebrate this harvest festival with traditional dances and songs. It falls on the 13th January when the Earth starts moving towards the sun marking the auspicious period of Uttarayan.

The earth leans towards the sun along the Tropic of Capricorn (Makara rekha) from the day following Lohri, also known as Winter Solstice. The earth, farthest from the sun at this point of time, starts its journey towards the sun along its elliptical orbit, thus heralding the onset of spring. It is this transition which is celebrated as Lohri.

Spending Time with Family and Friends

By celebrating Lohri altogether, people come across importance of agriculture, harvest and also relationship values. It gives a chance to spend time with family and friends. The main event of the day is huge bonfire with all the family members dancing around the holy fire. Thus, this festival is taken as a day to worship fire. Bonfires are also symbolic in paying homage to the Sun God as Lohri is the festival connected with the solar influence.

Preparations for Lohri celebrations begin way ahead the festival. People in villages begin collecting twigs, branches and cow dung whereas people in towns gather thin log of wood to make fire. Families consider it to be the best time to shower their blessings over the newly wed couples and new born babies. Even huge functions are organized for such celebrations. The seasonal goodies like revri, dry fruits, patti, peanuts and sugarcane form an integral part of the celebrations. People also throw these goodies into the fire while chanting and dancing around the fire. Womenfolk prepare a pudding of spinach, mustard leaf and lentil cooked in sugarcane juice which is believed to purify blood and cleanse our body from within.