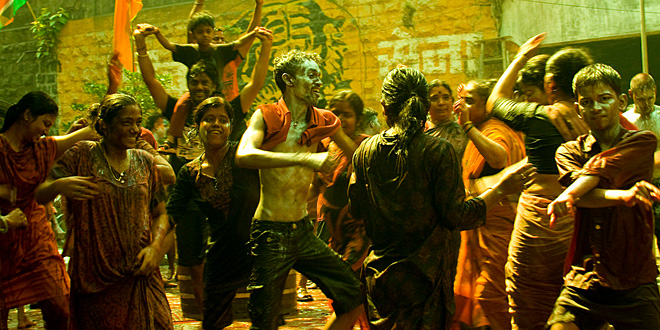 Holi in Maharashtra: Shimga or Rangpanchami

People of Maharashtra have their own grand style of celebrating Holi. Besides other things, not to be missed is their mouthwatering delicacy – Puran Poli.

Holi is called Shimga or Rangpanchami

People of Maharashtra commonly know this festival of colors by the name of Shimga or Rangpanchami. For, the play of colors is reserved for the fifth day here.

The festival is particularly popular amongst the fisher folk. They celebrate it in on a large scale and revel in the festivities by singing, dancing and merry-making. This special dance provide them means to release all their repressed feelings, needs and desires. People also utter sound through their mouths in a peculiar fashion by striking their mouths with the back of their hands.

People of Maharashtra celebrate Holi like the North Indians. Play with colors is reserved for Rangpanchami, which comes five days after Phalgun Poornima. On this day, they make bonfire and effigy of Ogress Holika is burnt symbolizing the victory of good over evil.

The state also gets its unique Holi flavor with the delicacies such as Puran Poli. Besides people drink sugarcane juice and feed children with watermelons that are in season.

Tolis to break the pot

Great excitement is visible in the youth of Maharashtra when it comes to Holi revelry particularly when it comes to breaking the pot. Trained groups also called tolis form huge pyramids to break the pot of butter-milk hung high on the street. Adding to the enthusiasm is the steady flow of colour water on the men by the womenfolk.

The tradition finds its roots in the legend that the Lord Krishna as a child was extremely fond of butter milk and used to steal it from an accessible house in his village.

Historic significance of Holi in Maharashtra

During the Maratha regime this festival was celebrated with great pomp and grandeur. It was on a Holi festival day that five-year-old Jijabhai, daughter of Lakhooji Jadhav innocently splashed colored water and threw gulal on young Shahaji, son of Malajirao Bhowale. Taking it as an auspicious event, the two children’s engagement was announced that very day. Soon they were married. Later, Jijabhai gave birth to Shivaji, the founder of great Maratha empire.