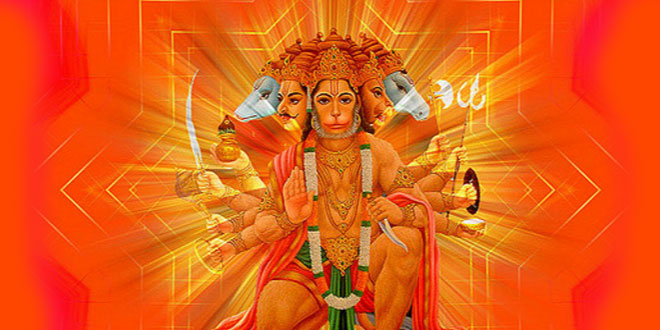 It is hard to find a mythical character who is at once so powerful, learned, philosophic, humble and amusing! Hanuman features prominently in the great epics of Ramayana and the Mahabharata. 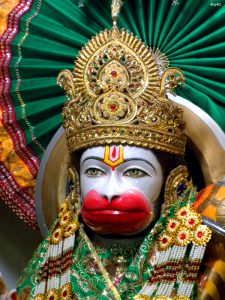 Hanuman met Rama and his brother Lakshmana while Rama was in exile in the jungle, and searching for his wife Sita who was abducted by Ravana. Their quest brought them near Pampa Lake at the foot of Mount Rishyamukha (near Hampi and belongs to Koppal district, Karnataka), where the monkey king Sugriva and his ministers were hiding. Sugriva, who was being persecuted by his brother Bali, suspected that Rama and Lakshmana might have been sent by Bali to slay him. To find out the facts, Hanuman approached them in the guise of a Brahmin.

In Service of Lord Rama

Hanuman’s initial words highly impressed Rama, and made him comment: “None can talk this way without mastering the Vedas. He has such a flawless countenance, a wonderful accent, and a captivating way of speaking. He has the ability to move even an enemy…” After he revealed his identity as the prince of Ayodhya, Hanuman fell prostrate before him in respect of the Lord. Rama picked him up and embraced him. There began the story of Hanuman, which is inextricably interwoven with Rama, and dealt with in detail in Valmiki‘s Ramayana and the Tulsidas‘ Ramcharitmanas.

Hanuman and the Pandavas

The venerable ape also features in the great epic Mahabharata. How Hanuman met the valiant Bhima, one of the Pandava brothers is itself a marvelous tale. He recognized Bhima as his spiritual brother, since both were born with the blessings of Pavana, the Wind God, and promised to aid the Pandavas in the big battle of Kurukshetra (in Haryana State of India). Hanuman positioned himself in the flag of Arjuna’s chariot to secure and stabilize the war-craft. The triangular saffron flag of Hanuman stands for stability and equilibrium, sense-control and mind-control, and a sure sign of victory over all that is base and evil.

Previous Hanuman: The Powerful – Poetry On Monkey God
Next Story behind the birth of Lord Hanuman?