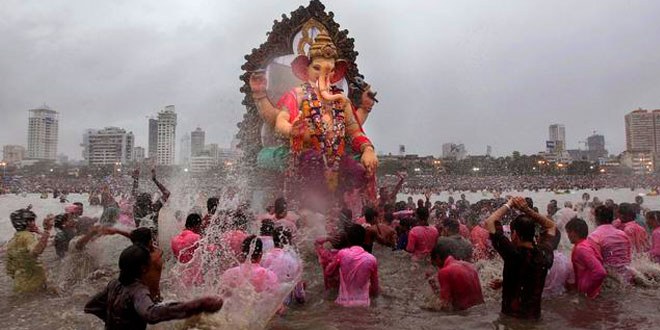 Ganesh Chaturthi celebrations in India: Ganesh Chaturthi is a spectacular festival, honoring the birth of Lord Ganesha. It is celebrated all over India, but the maximum grandeur is witnessed at Maharashtra. This festival witnesses various cultural events, which bring the public together and enhance the sense of belongingness and togetherness. The celebration ends with the immersion of the Lord Ganesha’s idol into the water. Huge processions of people carry the idol to a river, lake or ocean, accompanied by the chant of Ganapati Bappa Morya. Ganesh Chaturthi is the significant festival of Maharashtra, Karnataka, Gujarat and Rajasthan.

Ganesh Chaturthi is celebrated in almost each and every household of Maharashtra, with great faith and belief, for around ten days. The celebrations take place at both individual and community level. Huge pandals are set up and the idol of Ganesha is worshiped by the entire community together, with pomp and show. The celebrations begin with the installation of a Lord Ganesha idol in home, which is worshiped daily by the family members as well as their friends, relatives and even neighbors, who come to have darshan of the Lord. Various cultural events are also organized during these ten days. The celebration ends on the tenth day, when all the people go to the river or sea, to immerse the idol.

In Ahmedabad, the capital city of Gujarat, Ganesh Chaturthi is celebrated with great pomp and show. Offerings are made to Lord Ganesh at numerous temples. Elaborate arrangements are made for lighting and decoration and Ganeshji is fervently worshiped for about 7 – 10 days. On the day of the Chaturthi, i.e. the last of the ten days dedicated to God, idols are immersed at river Sabarmati and Kankaria Lake. Firecrackers are let off and huge images of Ganeshji are carried in grand procession for ‘Ganesh Visarjan‘ (immersion), accompanied by the sound of devotional songs and drums.

In Rajasthan, on Ganesh Chaturthi, an image of Ganesh is bathed in red kumkum and a garland of red flowers is put on the idol, placed by many households right outside their entrance. A small thaal, with haldi and kumkum, is also placed at the entrance, so that the visiting people take a pinch of each and put it on their foreheads and throat. Ladoos are usually kept in the house, to be first offered to Ganeshji and then distributed as prasad to the devotees.