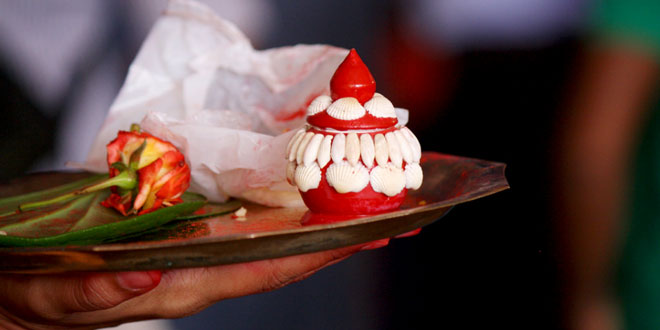 Durga Puja, the ten-day long festival, is celebrated with great enthusiasm and devotion. Apart from feasting, people indulge in fasting with sincerity, in order to show their dedication to the festival and their devotion to Goddess Durga. It is believed that fasting strengthens one’s capacity of tolerance. Fasting doesn’t mean that one has to starve all through the day. When people are fasting, they follow a diet that is formulated in such a way that they get enough energy to stay focused on the celebrations, without exhausting. If you want to know how people fast during Durga Pooja and the significance of fasting, then go through the following lines.

People following Hinduism have high regards for Goddess Durga, as she is the deity of power, courage and strength. According to them, fasting is an important part of worship to any deity. The spiritual motive of fasting during Durga Pooja is to deny the physical needs of the body and attain spiritual gains, apart from the blessings of the Goddess. The process also helps gain a harmonious coordination between the body and the soul and increases the concentration and tolerance power as well. The scientific reason behind fasting during the festival is to give rest to the digestive organs and cleanse the body of toxic materials.

Fasting In Different Parts Of India

In northern India, particularly in Punjab and Uttar Pradesh, there are people who fast for nine days of Durga Puja. In fact, it is a ritual for the people residing there, to fast during the festive season. Non-vegetarian food is completely avoided during fasting. The fast is broken only on the Maha Ashtami or Maha Navami by offering food to beggars and worshiping young girls. The people, who have hosted the feast, worship young girls, as they are regarded as the ‘kanya avatar’ of Goddess Durga.

Fasting during Durga Pooja in eastern and western parts of India is a bit different from that seed in northern part of the country. At several places in eastern India, there is a tradition of sowing barley seeds, when fasting is observed during the Durga Pooja. A small bed of mud is prepared in a little container, wherein small barley seeds are sown. During the fasting period, this container is placed in the Puja room. As the days pass by, the barley seeds begin to sprout. As the fast culminates, the seeds would reach a height of 3-5 inches, which would be pulled out and offers to devotees as a form of blessings by Goddess Durga.

Over the passing years, the ritual of fasting has seen a drastic change. The perception of starving for the whole day, during a fast, has changed completely. Today, people do not want to run out of their energy levels. Therefore, they eat foods and snack items, such as vrat ke namkeen, vrat ki chaat, that are prepared using rock salt (sendha namak). Apart from fruits and milk, people also drink tea, in regular intervals. Restaurants in the metro cities also offer special menu for fasting during Durga Puja, to satisfy their taste buds.