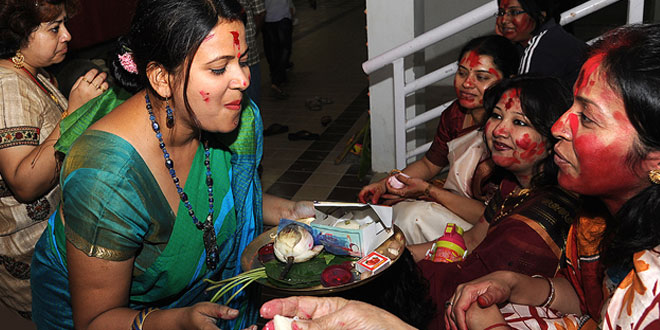 Durga Puja Customs: Durga Puja is celebrated with pomp and geity in West Bengal state of India and among the Bengalis all around the world. People enjoy all the ten days of the festival with a lot of fun and religious observance. In fact, Durga Puja is the most important festival for Bengalis. Kolkata, the capital city of West Bengal, immerses itself in a week of amazing festivity. Pooja pandals (big tents) are set up in almost every street of the city. The seventh, eighth, ninth and the tenth day of the ten-day festival are prominent, when the important rituals of the occasion are conducted. Go through the following lines to learn about the rituals of Durga Pooja.

According to the mythology, Goddess Durga arrives to the mortal world from her heavenly adobe, with her children. Her arrival on earth is welcomed by the devotees with much fanfare, amidst the beats of dholak. The main ritual carried on this day is the unveiling of the face of the idol of Goddess Durga. The rituals of Bodhon, Amontron and Adibas are performed before the commencement of the puja.

With the first rays of the sun on Maha Saptami (the seventh day), a tree is dressed as the Goddess Durga herself in yellow silk cloth with a red border. The tree deemed to be the Goddess then becomes the spotlight attraction for the rest of the festival. The priest carries the tree in a grand procession to the Durga Puja pandal (big tent) accompanied by the drummers to welcome the Goddess. A platform is set up with an idol of Lord Ganesha already seated there.

The tree-goddess is then installed beside the God of good fortune and then worshiped. The Kola Bow or Nabapatrika receives a holy bath, which is performed well before the dawn, on saptami. In this ritual, nine types of plants are worshiped as a symbol of Goddess Durga. Kalparambho and Mahasnan are preceded by the mahasaptami puja.

The next day or Ashtami was traditionally the buffalo sacrifice day to commemorate the victory of the Goddess over the buffalo-demon Mahishasura. However, there are no more sacrifices on the day, except for a few incidents that may occur at the orthodox villages in the remotest areas but the Indian government and the modern wave of animal love and compassion discourage them too.

The devotees of Goddess Durga start the celebrations of Maha Ashtami with the recital of Sanskrit hymns in community puja pandals. They offer anjali to the deity. The worship of little girls, called ‘kumari puja, is the main attraction of the day. In the evening, Sandhi puja is conducted, which marks the inter-linking of the Maha Ashtami with Maha Navami.

Maha Navami, the ninth day, is the main day of Durga Puja. The day begins after the end of Sandhi puja. ‘Maha Arti’ that is considered a formal end of religious customs. Merriment, music and dance fill the rest of the day. On Maha Navami, the navami bhog is offered to the deity. This food takes the shape of Prasad, which is partaken by the devotees.

Dashami is the last day of Durga Puja, when a tearful farewell is offered to the deity. This process is called Visarjan, wherein a grand send-off is arranged by the devotees. The idol of Goddess Durga, amidst a long procession of devotees, is brought to the nearest river or lake, to immerse it. This event is also called Vijaya Dashami.