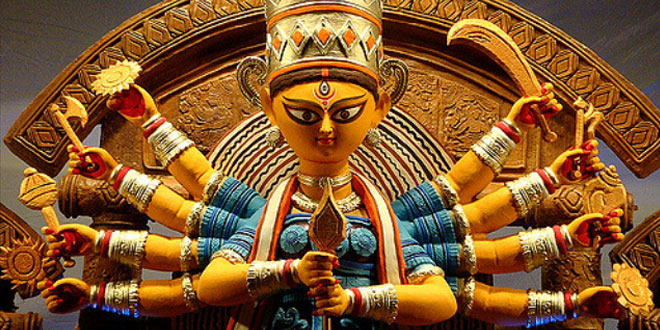 Durga Puja or Durgotsab is one of the most popular Hindu festival in India. It is a ten days long festival in which Goddess Durga, the Hindu goddess of power, Durga or Shakti is worshiped in nine different forms. It is a ten days affair in which last six days are observed with elaborate rituals and intricate ceremonies. It is considered that the Goddess is invoked on the fifth day Mahalaya and then onwards extensive ceremonies go on Shashthi, Maha Saptami, Maha Ashtami, Maha Nabami and Bijoya Dashami. On the occasion of Dashmi, the Goddess is believed to have left for her universal abode and thus her idols are immersed into sacred water.

When And Where Is It Celebrated?

This festival generally lies in between September to November according to the Gregorian calendar. The dates of the Pooja are decided according to the Hindu religious calendar. It is celebrated in the Northern and Eastern states of India – West Bengal, Bihar, Jharkhand, Odisha and Tripura. Apart from these places states like Delhi, Maharashtra, Gujarat, Punjab, Kashmir, Karnataka and Kerala also enthusiastically participate in the festival.

For Hindus ‘Puja’ is all about prayers, rituals, and songs. Even though Durga Puja has become more like a feast and social event, the most important aspect remains the religious celebration to honor the Goddess Durga. The first four days are days of ‘Kalash Sthapana’ and Kalsh Pooja. The main festivities start from the day of Mahalaya when it is believed that Devi has been invoked in the idol. During the last five-days (Shasti, Saptmi, Ashtmi, Navmi and Vijayadashmi) of the festival people pay tribute to the goddess through ‘Pushpanjali’, Aarti and ‘Bhog’. Different kinds of prayers and different kinds of ‘bhog items’ are prescribed for everyday from Mahalya onwards. People make different kinds of offerings and honor her through ceremonies, prayers, and songs. Special Pooja rituals are prescribed for each day. Generally, a community pooja is performed where a priest performs the pooja for the entire community. Generally, People attend their own community pandal for daily rituals, ceremonies, music, dances, and food, but they also other pandals for worshiping the Goddess. In different states, different rituals are attached with Pooja and people follow the trend.

Durga Pooja has always been an integral part of the Hindu culture especially in West Bengal, where there have been grand ceremonies on this occasion right from the 16th century. The trend of grand celebrations in the country began from the ‘Sharadiya Durgotsab‘ festivals organized by Raja Kangshanarayan of Taherpur and Bhabananda Mazumdar of Nadiya in 1606. Since then Durga Puja celebrations have been observed as a day for merriment with friends, relatives, neighbors and acquaintances throughout the north and eastern part of India. However, the Puja celebration over the years have transformed in presentation often. Earlier, it was a family affair for rich and affluent people of a community and now it has become more of a community affair where people contribute towards the celebrations. In present times, the evolution of many clubs, associations and societies has made the Puja cosmopolitan in character.