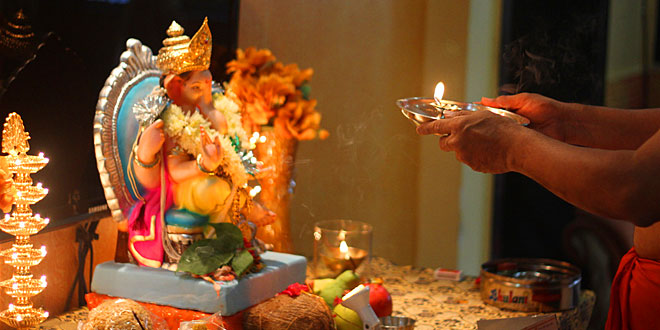 Aartis are the special prayers that are sung to please the God. Through these prayers, we admire and appraise the Almighty and pray to bestow blessings upon us. In India, songs are sung in melodious tunes during the performance of aarti, which marks the culmination of any puja, jaagran or keertan. It is believed that these aartis please the Lord in the most convincing way. ‘Bhajans’ are also sung during the worship rituals. Singing devotional songs at the time of aarti creates a divine environment and fills everyone’s heart with spiritualism.

Songs, either the traditional or the new ones, are sung at the time of aarti during Lakshmi Puja, Ganesha Puja and Kali Puja on Diwali. Either the devotees present in the puja sing the songs, or professional singers are called upon for the purpose. While bhajans are sung all through the kirtans, certain songs are especially sung during the performance of aarti. The tune of the very popular song ‘Om Jai Jagdish Hare‘ is in wide use for a number of aarti songs. In this section, we have compiled the lyrics of some of the popular songs that can be sung during aarti, on the occasion of Diwali.

Puja is an important ritual in Hindu culture. It marks the beginning as well as the culmination of many customs. Pooja finds prominence in various Hindu festivals, such as Durga Pooja, Diwali, Dussehra etc. The ritual is regarded as the most convincing way to invoke a deity and seek his/her blessings. This is the reason why special arrangements are made for a pooja, so that the proceedings are carried on smoothly.

In order to please the Goddess of Wealth, Lakshmi puja is conducted on the third (main) day of the five-day festival, Diwali. On the day, people clean their home and premises, illuminate the place with earthen lamps (diya) and electric lights. In the evening, they offer prayers to Goddess Lakshmi and pray for good health and prosperity. During the puja, some like singing bhajans, while others chant mantras.

One of the most popular Hindi aartis, ‘Om Jai Jagadish Hare’ is sung almost in every puja. The song was originally composed by Pandit Shardha Ram Phillauri in Punjab, in 1870s. Hindus of all background are well acquainted with the tune of the song, which is used in many other Hindi aarti songs that have similar lyrics. According to the historical records, ‘Om Jaya Jagadisha Hare‘ was inspired by Dashavatara section of Gita Govinda of Jayadeva, a lyrical composition that dates back to the 12th century, which has the same refrain.

Lord Ganesha, the elephant-deity, is one of the most worshiped Hindu idols. He is regarded as the God, who banishes all the obstacles, when worshiped with utmost sincerity and devotion. Known by as many as 108 names, Lord Ganesha is worshiped in innumerable temples that are especially dedicated to him. In fact, Ganesh Puja is performed before worshiping any other deity. After the puja is performed, aarti is done, which marks the culmination of the ritual.

It is hard to see a Hindu, who doesn’t have adoration for Lord Rama. Lord Rama is regarded as the epitome of humankind. Lord Rama is considered as the perfect husband, ideal son and adored father. According to the Hindu epic ‘Ramayana‘, Lord Rama was born in the human form in the Tretha Yug, as the seventh incarnation of Lord Maha Vishnu. Lord Rama is worshiped with sincerity by his devotees. Temples dedicated to the deity conduct special pujas during occasions like Dussehra and Rama Navami.