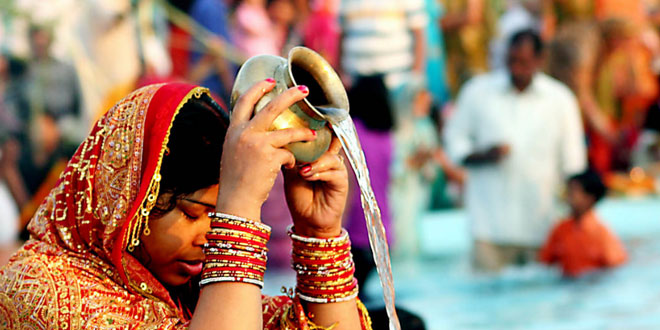 Draupadi, wife of the Pandavas, has a great power to cure any type of disease including leprosy and other severe disorders. The main factor behind this was she worships Sun God (Surya Bhagwan) with utmost devotion. Sun rays have power of curing any disease. The celestial and divine energy of Surya made her most powerful woman in the world to cure any severe disease. As a commemoration of Draupadi and Surya Puja, the main Deity to worship on Chhat Puja is Surya.

Chhat Pooja or Surya Sashti vrat is observed by King Karna, the son of Surya, who was renowned warrior and well-known for his nature of charity. Since Karna became a popular King by observing Surya Puja, Hindus also worship Surya dev for courage, fame, health, wealth and prosperity.

The Goddess who is worshiped during the famous Chhath Puja is known as Chhathi Maiya. Chhathi Maiya is known as Usha in the Vedas. She is believed to be the beloved younger wife of Surya, the sun god. In mithilanchal region (comprising Tirhut, Darbhanga, Kosi, Purnia, Munger, Bhagalpur and Santhal Pargana divisions of India and some adjoining districts of Nepal) she is also worshiped as name of “RANA MAI”.

This is the only festival which signifies both the rising and setting sun.

The most unique feature about the Chhath Puja is the main idea behind it which is above the disputed concept of Murti Pujan (Idol Worshiping) unlike most of the festivals of the Hindu religion. Some people simply believe that, Sun is necessary for life of possibly every creature on the earth and this festival is a way to pay tribute to it irrespective of caste, creed, gender and social stigmas.