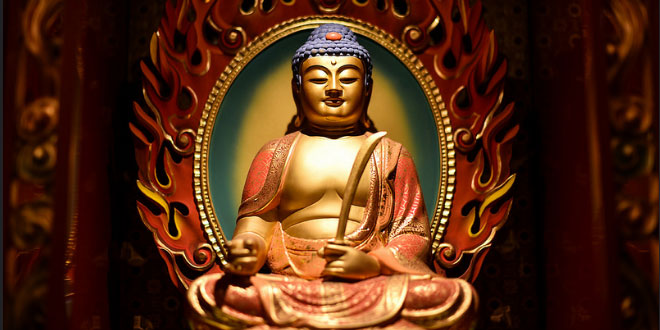 The three most significant events in the life of Great Buddha occurred on the same day. His birth, enlightenment and death (nirvana), all happened on a full moon night in April / May. This makes the day – called Buddha Purnima or Buddha Jayanti – all the more sacred for Buddhists.

The Buddha was born Siddhartha Gautama in 544 BC, to King Shuddhodhana and Queen Mayadevi, rulers of Lumbini, Nepal. According to legend, Siddhartha’s wife Yashodhara, his charioteer Channa, his disciple Ananda and his horse Kantaka were also born on Buddha Purnima day.

Buddhism was originally a sect within the Hindu way of life. Its originator had the personal name of Siddharta, and the surname Gautama. He belonged to the Sakya clan of the Kshatriya or warrior caste. He married and had a son, Rahula. But after some years he left his parents, wife and child. The king, his father, had three palaces built for him, and at the age of sixteen gave him forty thousand dancing girls. Yet thirteen years later Gautama left everything to find, in his own words, “the incomparable security of a ‘Nirvana’ free from birth and endless reincarnation.” One day, as he sat in meditation under a bodhi tree, he became the “enlightened one”. The “enlightenment” took place in Gautama’s thirty-sixth year. His death occurred around the age of eighty. His day was divided between itinerant preaching in the morning and receiving visitors for discussion at night, with the afternoons reserved for private meditation. He gathered a number of followers. He was strongly opposed by the Brahmins for teaching that gifts to the Buddhist order were of more merit than the sacrifices, which Hindus practiced.

Shortly before his death, Gautama assembled the members of his order, and gave final instructions. “Be lamps to yourselves,” he bade them. “Betake yourselves to no external refuge. Hold fast to the truth as a lamp. Hold fast as a refuge to the truth. Look not for refuge to anyone besides yourselves.”

In the Dharma or teaching, little Buddha did not discard the substructure of primitive Hinduism, but rather built upon it. He seems not to have doubted the existence of gods and of evil spirits. His concern was uniquely with deliverance.

To obtain liberation the disciple must put into practice the “Four Noble Truths”. “They are, in sequence, that existence involves suffering, that the cause-of suffering is desire and the clinging to existence, that the way to escape from suffering and existence is to be rid of these desires, and to be delivered one must follow the eightfold path mapped out by the enlightened one.” “Buddha preached a religion devoid of speculation, and it is only on this premise that his accent on suffering can be understood.” Buddha denied there was a soul. “The self-denial he advocated was literal, a denial of self-hood with its mirage of an individual and personal soul.”

The founder of Buddhism postulated that life is a stream of becoming. There is nothing permanent in the empirical self.

Throughout life all his sermons, exhortations, and counseling had only one theme, Nirvana. Yet the important question for him was not, ‘What is Nirvana?’ but, ‘How is Nirvana attained?’

The way that leads to the extinction of suffering is the holy eightfold path, namely right understanding, right-mindedness, right speech, right action, right living, right effort, right attentiveness, and right concentration.” “Original or ‘authentic’ Buddhism is accurately called atheistic, not as though the gods of Hinduism or Brahman were explicitly denied, but because nowhere in his ‘religion’ did great Buddha provide that a transcendent deity should be invoked or even that his existence should be formally acknowledged.