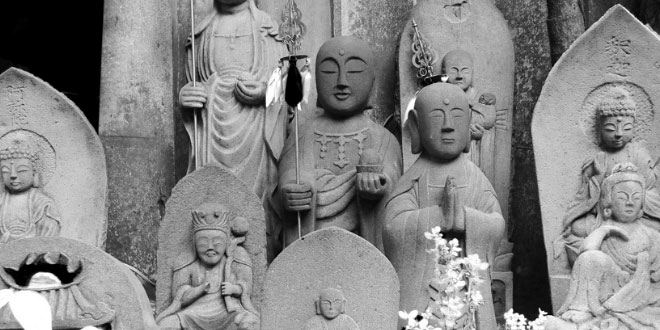 Bodh Gaya (Bihar): Before his death, the Buddha enjoined his followers to make pilgrimages to four sites: Lumbini, where he was born; Uruvela (modern Bodh Gaya), the site of his enlightenment; Sarnath, the place of his first sermon; and Kushinara, where he died. Each of these sites may be visited today, and Bodh Gaya remains the most sacred of the four.

After the decline of Indian Buddhism in the 12th century, most Buddhist sites were destroyed or fell into disrepair. In 1891 the Sri Lankan Anagarika Dharmapala founded the Mahabodhi Society, which set out to reclaim Bodh Gaya for Buddhism; this was achieved in 1949. Bodh Gaya today is a busy centre of pilgrimage with monasteries and meditation centres run by Tibetan, Burmese, Thai and Vietnamese communities. Visitors will see a remote descendant of the bodhi tree, the magnificent but greatly restored 7th-century Mahabodhi temple, the Buddha’s stone seat (vajra-asana) and a museum of Buddhist and Hindu materials.

Sarnath (Uttar Pradesh): The Deer Park at Sarnath just north of Varanasi was the site of the Buddha’s first discourse and today contains some of the most impressive Buddhist monuments in India. The beautiful park is dominated by the 5th-century Dhamekh stupa: one of two stupas marking the spot where the Buddha is said to have first taught the Dharma. The remains of smaller stupas, shrines, five monasteries and the lower half of an inscribed Ashokan column are among other monuments to have been excavated since the 19th century.

Sarnath’s archeological museum contains the Ashokan column’s famous lion capital (emblem of the modern Indian state) and many other important works in stone, including a sublime figure of the teaching Buddha from the Gupta period (5th century). Like Bodh Gaya, Sarnath has a thriving international Buddhist community.

Sanchi (Madhya Pradesh): Perhaps the finest and most complete Buddhist monument in India is Sanchi’s great stupa with its four magnificent free standing gates (toranas). The vast brick stupa itself dates from around the 3rd century BC, but its carved gates and railings were probably executed two centuries later during the Satavahana dynasty. Sanchi was excavated in the early 19th century, and the restoration of the site by British and French archaeologists was initiated in 1912.

Visitors today, like traditional Buddhist worshipers, can circumambulate the stupa in a clockwise direction and contemplate the teeming sculptural forms that fill the gate posts and their lofty architraves. Jataka narratives, hieratic elephants and royal lions, Hindu-Buddhist deities and exquisite female nature spirits crowd every part of the four toranas. The small archaeological museum houses excavated sculptures; other important Sanchi pieces are in museums in Delhi, London and Los Angeles.

Ajanta (Maharashtra): The wild, crescent-shaped ravine pierced with more than twenty Buddhist cave temples makes this one of India’s most spectacular sites. Many genres of early medieval sacred art, from elaborately carved monastic halls, to sculptures and wall paintings, are represented here, and prominent among Ajanta’s glories are murals painted in glowing reds, blues and greens. Unique to Indian Buddhist tradition, the paintings, in high Gupta style, furnish a vision of Mahayana generosity: a mingling of human, divine and natural forms in a suspension of warm and life-enhancing interplay.

Most sublime in grace, compassion and serenity is the incomparable figure of Padmapani, the lotus carrying aspect of the bodhisattva Avalokiteshvara (cave 1). Scenes from Jataka narratives adorn the walls of several other monasteries in the complex.

Kapilavastu and Lumbini: Siddhartha Gautama, the future Buddha, was born at Lumbini near the Shakyan capital of Kapilavastu in the southern region of Nepal known as the terai. The 5th-century Chinese pilgrim Fa-hsien described Kapilavastu as a “great scene of empty desolation”, populated by a few monks, a score or two of families and dangerous animals such as lions and white elephants. Fa-hsien none the less visited well-known sites, including the Shakyan palace, the place where the child bodhisattva’s identifying marks were discovered, and, east of the city, the garden of Lumbini where the future Buddha’s mother bathed and gave birth. Mounds, stupas and other ruins testified to previous Buddhist institutional prosperity. Buddhist tradition tells that the emperor Ashoka visited Nepal in the 3rd century BC and erected a stupa and an inscribed column at Lumbini. Recent excavations have uncovered evidence of stupas, monastic dwellings and the well-preserved structure of the bathing-pool. The Ashokan column -rediscovered in 1896 but snapped in half by a lightning bolt – may also be seen at Lumbini. Theravada and Tibetan monasteries have been built in the past two decades near Lumbini, re-establishing the site as an important, although geographically remote, devotional centre.

Svayambhunath and Bodhnath (Kathmandu): To commemorate his missionary visit, the emperor Ashoka is said to have built innumerable stupas in Nepal. Two surviving examples, much restored, may derive from the Ashokan period. These are the remarkable Svayambhunath and Bodhnath stupas in Kathmandu. Both stupas share unique Nepalese architectural features. Surmounting the conventional dome is a “steeple” raised on thirteen diminishing tiers to symbolize the thirteen Buddhist heavens. Yet more striking is the design of the square base (harmika) from which the tiers rise. The harmika is gilded, and a face gazes with immense eyes of inlaid metal and ivory from each side. One explanation for this unique Nepalese iconography is that the eyes suggest a solar cult expressed on some Hindu temples by “sun-faces”. A second idea is that the temple represents the “Primal man” (mahapurusha) of early Hinduism. Buddhist theory would suggest that the eyes are a sign of the “all-seeing” Buddha. Visitors are certainly struck by the way in which the eyes follow them as they move round the stupa precincts.