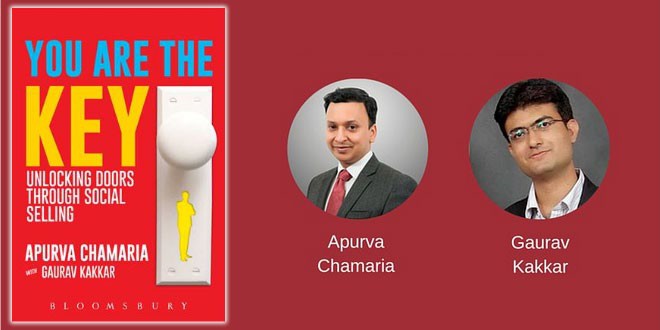 You Are The Key – Apurva Chamaria and Gaurav Kakkar

Aiming to cope with the changing world, sales methodology has evolved across the world. This book delves into the pros and cons of social selling and its various aspects and provides a holistic view of the subject.

Saying that the laws of microeconomics find a direct correlation between demand and supply, the authors add: “I would throw sales as a game changer in this classic economics equation.”

“Social selling is the use of social media to interact directly with prospects, answer queries and offer thoughtful content until the prospect is ready to buy. Social selling is a dynamic process. However, even in that, not all aspects are completely new. Social selling is also not a formula that can be implemented by anyone, but at the same time, it isn’t complex enough to demand specialised skills.”

Of the two authors, Apurva Chamaria is the vice president and head of global brand, digital, content marketing and marketing communications for HCL Technologies (HCL), a $7 billion global IT major, and Gaurav Kakkar is the head of the company’s digital marketing team.

They write: “When it comes to social selling, sales and marketing do not work in complimentary terms, but converge in their exercise to generate more awareness, engage with potential customers and convert them to possible leads.”

Describing modern human beings as more social than their ancestors, the authors sy: “Sales methodologies have evolved over a period of time, and there is a reason for that. Mainstream sales methodologies began to appear in the late 1970’s, and were in fact, a by-product of the technology boom and early years of the information age. Technology was making bold inroads into businesses, and those deploying in their businesses were looking to make the most of their position.”

The book also provides a lucid diagram on evolution of sales methodology. It also cites some case studies of big corporates which engaged themselvew with social selling.

But the internet has melted boundaries and restrictions on the human mind, making it easier to interact with people from different cultures.

“Today it is the internet and the power of social selling that has transformed the sales methodologies of modern trade. The world has opened up, markets have opened up, transparency is the buzz word and almost everything under sun is open to scrutiny.”

“Today, what an organisation sells is no longer the product or service alone. It is an idea; a belief; a statement; a thought. At the heart of it, every selling is social.”

“As a salesperson looking at the social construct of the buyer, your aim should be to convert that ‘spectator’ into a real customer,” the authors say.