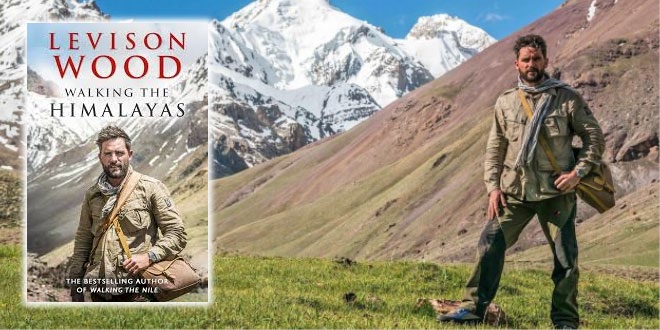 Levinson Wood clambers up steep mountains and treks through narrow passes, taking us on a journey that begins in Afghanistan, moves through Pakistan and India and ends in Bhutan.

In his book, he explores and presents an animated vision of the paths he treads — many of them treacherous — as well as the people he meets on the way. His expedition is easily any mountaineer’s dream.

He and his guides followed “almost precisely the ancient Silk Road that was built as a joint project by the Pakistan and Chinese governments”.

The Karakorum Highway (KKH) connects China and Pakistan across the Karakorum mountain range.

His book is not merely an account of the passes and mountains he and his guides journeyed through. It is a visual travelogue of the people he meets on the way and then meets them again after many years.

For example, his association with his Nepali guide Binod Pariyar, who saved the 19-year-old Wood from the violence that erupted after the royal family of Nepal was massacred. He has visited Pariyar a couple of times later.

He has kept a careful note of what people and specially women wore at different places and how each was an embodiment of their culture. He vividly remembers how the type of houses and tracks changed with terrain.

A full-time explorer, a photographer and a journalist, Wood has spent 10 years in the British Army. He has travelled in over 80 countries and has lived in Africa and Asia for many years.

As a captain in the British Parachute Regiment in 2009, he had “served around the world, including a brief stint in Afghanistan, a rollercoaster ride of action-packed exercises in the forests of East Africa to combat duty in the deserts and mountains of Southern Afghanistan”.

But he was now moved to desk work, something he soon realized he did not enjoy at all.

As a teenager, Rudyard Kipling’s short stories had fascinated him about Britain’s colonial past and “her involvement in the Indian sub-continent and the high mountain passes that led to the interior of Asia”.

But what he now embarked upon was a “travel plan from the western most fringes in Afghanistan… all the way through its main arteries… via Pakistan, India, Nepal and finishing up in either Tibet or Bhutan”.

He rightfully gauged that the journey would be riddled with enormous and varied challenges. Also because in such terrain, it is difficult to predict the weather or what you might see at the next turn of a cliff. He also takes into account factors such as the “insurgency in Afghanistan, landslides in Kashmir, Maoists in Nepal” as well as “grizzly predators throughout”.

It is an easy read with loads of information and a few photographs of the region, its people and its culture. It can also be used as a guidebook if you intend to traverse through the area or parts of it.