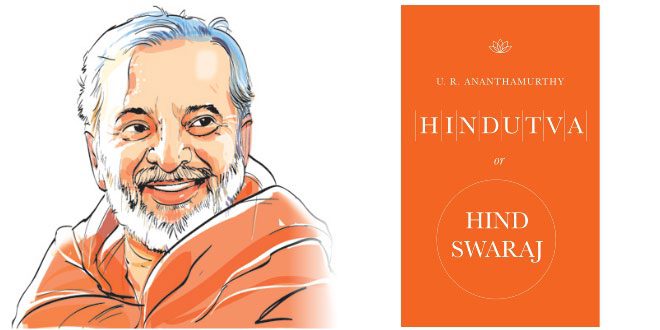 Every country and society may have differing narratives of the past and for its future – and they can alternate. While their committed adherents fight for ascendance, the issue gains most significance during the ‘tectonic shift’ when one particular narrative attempts to replace another – as seen in India in 2014. How do we judge between the competing narratives, and are we bound to accept whichever becomes dominant?

Kannada litterateur and academician U.R. Ananthamurthy (1932-2014) tried to deal with these and other related questions in this, which turned out to be his last book. A lifelong critic of Hindutva and right-wing politics, he also sought to warn of the possible effects of an ideology that he much distrusted when its return to national predominance seemed imminent.

Ananthamurthy, whose “emotional” announcement in 2013 that he would not like to live in a country ruled by Narendra Modi led to criticism and even threats from his supporters, starts with this issue only, contending that the requirement he “should accept someone who has ascended to power through a majority because it is a democratic norm is what I don’t agree with”, as “providing room for those not in the majority is fundamental to democracy”.

“Ignoring those who have denigrated me nationwide for my scepticism about Modi”, he seeks to present his views “in the form of sutras, a set of aphorisms”.

Drawing abundantly on examples from history (both Indian and world), religion (the Prophet Job particularly), literature (Rasolnikov from Dostoyevsky’s “Crime and Punishment” but also Joseph Conrad and Rabindranath Tagore), psychology (Jung), Ananthamurthy weighs on an array of issues from dangers of nationalism, despoiling of the environment, disappearance of the compassionate society, and development alternatives. No less provocative, his prognostications happen to bear an uncanny prescience, given some present day-events.