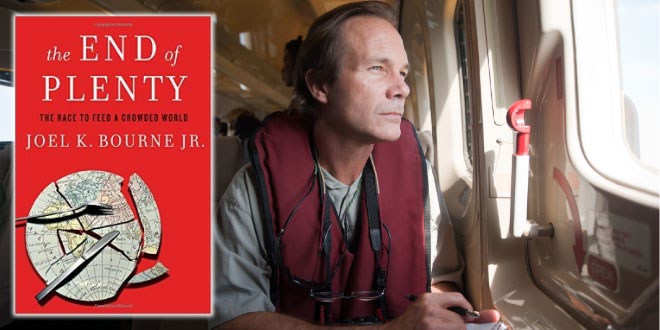 With global food shortage peaking in the past decade, American author Joel K. Bourne Jr. paints the vision of an apocalyptic future for humankind if concerted efforts are not made to ward off what Robert Malthus had predicted as the coming of an “agricultural Armageddon.”

The ideas of the 18th century economist, Malthus, who wrote the classic “Essay on the Principle of Population”, are at the heart of “The End of Plenty”. Malthus predicted that while human populations will increase at a geometric rate, food production will grow much slower in comparison till, at a point, population growth will exceed the food supply, leading the planet towards certain catastrophe.

The burden of “The End of Plenty” is that the global food shortage, which has reached an all-time high over the past decade, is only going to get worse.

Bourne’s thesis is that the world is not producing enough food for the population – and in a manner that rapidly integrates ecologically destructive and unhealthy methods and technologies to produce larger quantities. The physically harmful techniques include the use of genetically modified crops, synthetic pesticides and fertilizers and technologically-induced water-intensive irrigation involving much use of this precious resource.

As a result of the food shortage, prices continue to rise, leaving billions locked in a continuous struggle to afford their meals – or even eat.

Bourne cites the Earth Policy Institute to say that as more grain has been diverted to livestock and to the production of biofuels for cars, annual worldwide consumption of grain has risen from 815 million tonnes in 1960 to 2.16 billion in 2008.

People are working ways to increase the world’s food supply but if population growth is not curbed and if the world continues on its present track, disaster is inevitable, he says.

“The End of Plenty” is replete with studies, statistics and facts that Bourne, as a science journalist, has gathered over half-a-century. The mass of cold data, however, is compellingly interwoven with sensory details and imagery.

An example is the way Bourne begins. “It is the simplest, most natural of acts, akin to breathing and walking upright. We sit down at the dinner table, pick up a fork and take a juicy bite, oblivious to the double helping of global ramifications on our plate.”

His account is illustrated with stories from the world over, while India, particularly Punjab, finds central place. He begins with the Bengal Famine of 1943, which killed as many as four million people, and for the following two decades India had to import millions of tonnes of grain to feed its people.

With grim examples from Punjab, a state currently in the throes of various agitations, including by farmers, Bourne details the environmental costs of the Green Revolution in India, a country that also has the most number of malnourished.

“Better seeds, combined with more fertilizer, pesticides and irrigation, enabled farmers to grow more crop from each acre. Farmers grew so much extra food during the 1960s that they actually helped alleviate global poverty by making food cheaper in most places around the world,” he writes.

The miracle of the Green Revolution is over in Punjab. Yield growth has tapered off since the mid-1990s. Over-irrigation has led to steep drops in the water table, now tapped by 1.3 million tube wells, while thousands of hectares of productive land have been lost to salinization and waterlogged soil.

“Forty years of intensive irrigation, fertilization, and pesticides have not been kind to the loamy gray fields of Punjab. Nor, in some cases, to the people themselves,” says Bourne, recounting the tragedy of families stricken by cancer from long exposure to pesticides in food.

“Researchers have found pesticides in the Punjabi farmers’ blood, their water table, their vegetables, even their wives’ breast milk. So many people take the train from the Malwa region to the cancer hospital in Bikaner that it’s now called the Cancer Express.”

To compound the misery, the high cost of fertilizer and pesticides has plunged many Punjabi farmers into debt. One study found more than 1,400 cases of farmers’ suicides in 93 villages between 1988 and 2006. According to Bourne, some groups put the total for the state as high as 40,000 to 60,000 suicides over that period.

Bourne considers the conditions to restore plenty, including those of land, seed, water and organic farming, but all roads finally lead back to his point of departure – Malthus, who in 1798 wrote…”that the power of population is indefinitely greater than the power in the earth to produce subsistence for man”.

The American government and the Ford and Rockefeller Foundations earlier funded a birth control programme in India as part of the Green Revolution, and through the World Bank also financed a sterilisation campaign in the country.

However, “The End of Plenty” required to offer a deeper understanding of gender and women’s empowerment that is a precondition for effective population control, particularly in the Indian subcontinent. The gap in Bourne’s analysis appears more glaring when held up against conditions in India’s breadbasket – a strategic border state battling huge problems of drug addiction among male youth, and which almost scrapes the bottom of the barrel among states on the ratio of its female population to males.