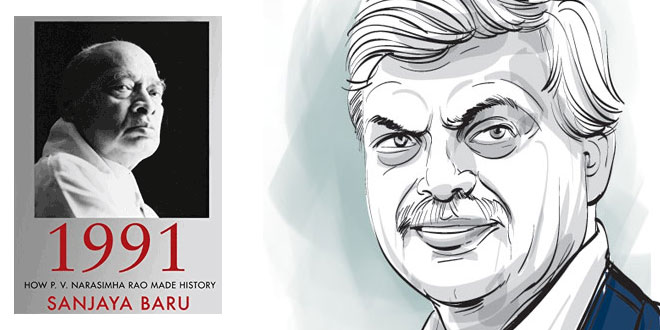 If today’s Indian leadership can boast about the country’s economic growth despite the world economy largely being in a slump, the credit largely goes to former Prime Minister P.V. Narsimha Rao, who set the ball rolling way back in 1991, says this book by veteran journalist and former media advisor to Prime Minister Manmohan Singh, Sanjaya Baru.

But Rao, like most other outstanding achievers outside the Nehru–Gandhi fold, remains largely unappreciated and underrated, thanks again to the “First Family” that has made a (once) national political party its personal fiefdom.

Baru places Rao’s achievements against the backdrop of national and international social-political-economic circumstances of the time when India faced its worst economic crisis after independence.

The crisis, as Baru recounts, had its genesis in the 1970s and was left unattended — nay, aggravated, through “short-term political considerations and extreme political cynicism”, as Baru puts it — by the subsequent governments of Indira and Rajiv Gandhi, allowing it to snowball into a monster that threatened to inflict unprecedented damage on the sovereignty and credibility of India.

Baru recalls how former Prime Minister Chandrashekhar, sworn-in with Congress support, tried to stem the rapid decline through a slew of “forced moves”, but his efforts — notably to have persuaded the International Monetary Fund (IMF) to lend India desperately-needed dollars — were brought to a nought when a paranoid Rajiv Gandhi prevented the coalition government from presenting a regular budget in February, and when ultimately Congress’ high-handedness drove Chandrashekhar to throw in the towel.

After Rajiv’s assassination, Rao, who was mulling retirement at that point in time, was thrust to the top by a combination of luck and political manoeuvring.

The book describes in detail how Rao not only managed to run a minority government but turned the country’s fortunes around along with his hand-picked confidants (Manmohan Singh, who was named his Finance Minister and later went on to become a two-term Prime Minister, being one of them).

“Before P.V., at least four senior political leaders — three of them ex-Congressmen — tried leading non-Congress governments in New Delhi: Morarji Desai, Charan Singh, Chandra Shekhar and V.P. Singh. All of them failed. Most of them were in office for less than a year. P.V., however, demonstrated his staying power within a year. He did this not by becoming authoritarian, but by being democratic in his instincts, consensual in his approach and, above all, transactional in his dealings,” Baru writes.

However, Rao, was never accorded the due respect or credit by the Nehru-Gandhian Congress the former Prime Minister deserved. Worse, it disowned him.

Baru writes: “During the intervening years the Congress Party disowned P.V. His name was virtually erased from the party’s public memory. When he died, the party shut the gates of its headquarters and refused to bid an official farewell to a former (party) president. His crime: Seeking to end the proprietary control of the INC by the Nehru-Gandhi family. P.V. died on 23 December 2004… Even Manmohan Singh was unable to honour P.V. with a Bharat Ratna during his decade-long tenure as Prime Minister. The party had again become a proprietorship.”

Baru’s previous work, “The Accidental Prime Minister: The Making and Unmaking of Manmohan Singh” had sparked a row over its claim that the Manmohan Singh PMO was actually run by Sonia Gandhi. The present one, too, is certain to rub many the wrong way.

The National Girl Child Day is celebrated in India every year on January 24. It …