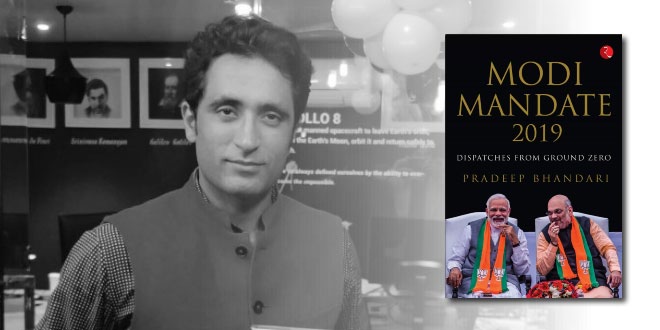 Psephologist Pradeep Bhandari has turned author with his debut book “Modi Mandate 2019: Dispatches from Ground Zero” which he penned after travelling to as many as 400 out of 543 Lok Sabha constituencies. Speaking to media, Bhandari said that the other than the fact that the book was written after extensive groundwork, it is written in a unique style which is easy to understand by readers.

“It is not just any other political book. This is real conversation and real people I talked to. All the conversations in this book are with regular Indian voter and not any politician. I went to tea stalls, pan shops, talked to village folks especially women to know what they are thinking and who do they think will come to power,” Bhandari said.

Psephologist-turned-author Pradeep Bhandari writes about visiting 400 constituencies across India to know what Indian voter thinks ahead of 2019 general elections.

Speaking about the unique format of the book which is more of a conversational style, Bhandari said, “It is like a conversation you have with friends. It is not a heavy-duty book with jargons. In fact, the book should be included in course for political science as it is the first book written with no generalizations and has ground report from 400 constituencies.”

“Aap kya keh rahe hain…yahan bhi aur kendra mein bhi aayega to Modi hi…” (What are you saying? Modi will emerge victorious here as well as get a majority at the centre…) said a Banaras Hindu University professor, as he chewed paan masala.

This was in response to my question: “Kya lag raha hai…sarkar badal jayegi iss baar? Idhar to Priyankaji aa jayengi log keh rahe hain…” (What does the situation look like? Will there be a change in government this time? People are saying Priyanka [Gandhi] would come to power…) We were at ‘Pappu ki Adi’, a famous tea shop in Banaras whose display board reads “Bharat ki rajneeti ko disha dene wala vishwa prasidh Pappu ki Adi” (The tea stall that has given direction to politics in India—Pappu ki Adi). The tagline read “Kashi ke sangeetkaron, professoron, patrakaron, kulpatiyon, acharyon aur rajeentigyon ka buddhi sanwardhan sthan” (The meeting point of Kashi’s professors, intellectuals, journalists, philosophers and politicians for intellectually stimulating conversations).

The gathbandhan had fielded Shalini Yadav, who had not even won a mayor election in the past, against Modi. It was clear they knew they didn’t stand a chance against Modi, and all they wanted was a scapegoat. After making a lot of noise, triggering debates and stirring up political discussions, Priyanka Gandhi Vadra, who once expressed interest in contesting against Modi, also decided not to contest, supposedly choosing to give time to handling party responsibilities rather than focusing on only one seat. The Congress, as a part of their usual modus operandi, chose Ajay Rai as a scapegoat. UP was peculiar in this sense. While Modi’s staunchest rivals in UP—Mayawati and Priyanka Gandhi Vadra—were themselves not contesting elections, they maintained claims regarding an anti-Modi current in the state. It was also evident from the fact that even Akhilesh Yadav, former Uttar Pradesh chief minister and president of the SP, couldn’t afford wagering by contesting from any seat other than Azamgarh.

It was in this city of the Ganges that I realized it was not Modi’s election but more of a mass public movement by the people who were campaigning for him. Banaras [also Varanasi] surprised me. In my entire journey, I had not encountered a reasoning as rational as I did in Varanasi.

“Modi! Modi! to kar rahe ho magar kuch vikas bhi hua hai yahan par?” (You are chanting Modi’s name, but has any development taken place here?) I asked, trying to imitate the renowned jibe often picked up by the Opposition. The man started chanting ‘Modi! Modi!’ the moment he realized I was shooting for a political show. I was about to write him off when to my surprise he started reciting Modi government’s schemes from A to Z.

When we reached the ghats, I couldn’t help noticing they were cleaner than ever before. My eyes fell on a poster which made a rather bold claim: “Kachre ka dibba maatr 50 kadam mein” (The next garbage bin is just 50 steps away.)

My sceptical mind sought proof. I asked one of my team members, Abhinav, to check and confirm if this was indeed true. Lo and behold, the results answered another burning question I had had for long: Why do people in Varanasi blindly trust Modi? The dustbins were placed within 50 steps, exactly like the poster claimed. And what was more, there were portable toilets too, placed in short distances near the ghats to ensure additional cleanliness. I could see vikas (development) right in front of me.

Modi had become synonymous with development, and I realized this soon after a well-learned man in his late sixties said this to me: ‘Modiji ko Banaras se nahi ladna chahiye, Banaras ka to kaafi vikas kar diye wo paanch saal mein…kahin aur se ladenge to wahan bhi vikas hoga‘ (Modi shouldn’t contest from Varanasi. He has done enough development here in the past five years. If he contests from another place, that place too will get developed).

While voters with a BJP leaning always backed their answers with reasoning, supporters of the gathbandhan and the Congress Party seemed to lack confidence in their leadership. They probably knew the outcome already.

To get diverse opinions, I sought out a famous dosawala opposite Vishwanath Mandir. He hailed from Andhra Pradesh and his opinion would mean a lot. However, his evaluation wasn’t any different from the majority in Banaras. He said: “PM pad ke liye to Modi hi sahi hain! (Modi is suitable for the prime minister’s post!)”

“If you permit me, I shall file my nomination from the holy city tomorrow. I will then return to thank you all after winning the polls!” Modi had said amid a sea of people chanting his name during his roadshow in Varanasi which traversed from Lanka Gate to Ganga Gate. Wherever he went, Modi was showered with flower petals apart from the unconditional love he received from the crowds. His roadshow was a festival in itself, its sheer opulence having the ability to overshadow Holi or even Diwali. Varanasi was shut voluntarily and people were on the streets to confer their unconditional support to the man who was now a part of their family and more.