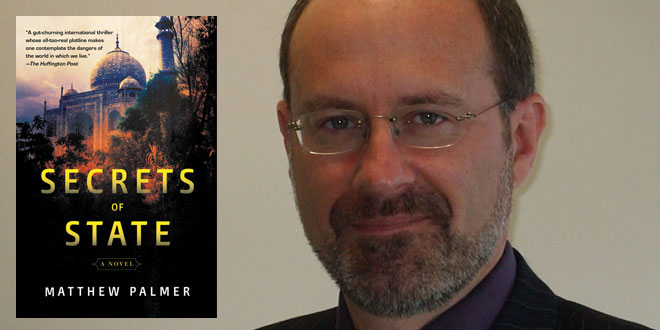 India, losing its patience over continuing acts of hostility emanating from its neighbour, and Pakistan, where jihadi elements are gaining primacy, seem to be drifting towards war and an audacious terror operation seems to make it a certainty. But is it just the inimical forces responsible for what is happening or is someone else manipulating them? And can anyone stop the looming catastrophe?

In a story that seemed ripped from today’s headlines, American diplomat-cum-thriller writer Mathew Palmer, in his second book, presents a taut, pulsating account of how wars can start — or be primed to start by vested interests far away. Then in South Asia, there are always many kinds of non-state actors who get involved too.

But, on the other hand, there are also those who try their hardest to prevent lies from winning and leading to widespread bloodshed.

In this case, it is Sam Trainor, an outspoken and sidelined State Department employee, who is now working for a strategic consulting firm, and suddenly finds there is something untoward going on as far as the tense South Asian situation is concerned.

In a surreptitious affair with a beautiful Indian diplomat posed in Washington, Trainor’s suspicions are raised when her name figures in an intelligence report — of a time when she was keeping a tryst with him.

Some further investigations leads him to discover attempts to further instigate the tensions in South Asia, with cooked-up intelligence having an incendiary effect as parts relating to the other country are shared with the Indians and Pakistanis.

Meanwhile, a new Pakistan-based terror group called “Hath-e-Mohammad” is planning an unprecedented and massive attack in India, with a new US-returned, and highly-trained, recruit its most enthusiastic.

But as Trainor seeks to dig further, taking severe risks, his efforts attract notice of a shadowy, but ruthless, cabal in the US. His State Department protege is murdered, and so is a CIA employee, and an attempt made on Trainor’s own life.

Then his half-Indian daughter who lives and works in Mumbai is kidnapped and he is warned to desist if he wants her to stay alive.

And as the clock ticks toward the unforgiving deadline, will Trainor, who finally discerns the contours of the immoral, unconscionable plan in the works, but without many friends or much funds and powerful adversaries ranged against him, be able to reach Mumbai — to save his daughter, let alone foil the terror outrage intended to take place during the Prime Minister’s visit?

But even if he gets to the crisis spot, is everyone with him or against him?

Right from a powerful beginning, which sets the scene, Palmer, in the US Foreign Service for 25 years now and is currently Director for multilateral affairs in the State Department’s Bureau of Asian and Pacific Affairs, uses his experience to good result in depicting the US diplomatic and strategic affairs community, as well as unsentimental and cold considerations that drive international relations and tradecraft diplomats can resort to.

His account of India, especially the subplot of Trainor’s daughter seeking to prevent a part of Dharavi being demolished by rapacious builders; her encounters with an obdurate bureaucracy, were well

done. So are the sights and sounds of India, though the emphasis on caste seems a little jarring after some time.

Also presented as plausibly is the terrorist gang, with its different types and the cold, calculating and number-crunching chief.

But where Palmer — who seems to have a penchant for maverick diplomats as heroes and his own experiences of Asia, Africa and the Balkans in his novels — strikes a weak note is in the use of a secretive, old cabal as hidden villains, though conspiracy theorists will love it (their involvement in matters such as the Lincoln and Kennedy assassinations, the Pearl Harbor attack and so on, are relayed through infrequent digressions throughout the narrative).

And it emerges there is another clique too.

It is this plot device, usually seen in Sidney Sheldon thrillers, that weakens a bit this otherwise relentless thriller, with a resonance to today’s world and a chilling end.