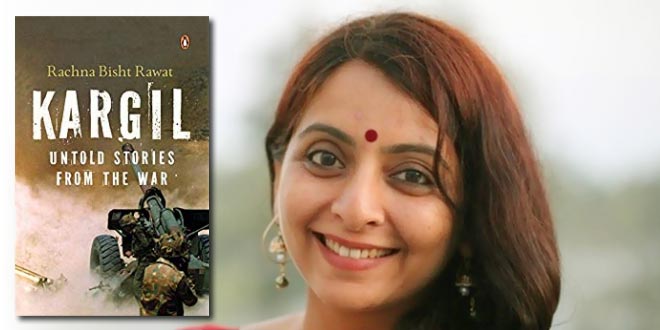 As India commemorates the 20th anniversary of the Kargil War, ‘Kargil-Untold Stories from the War‘ author Rachna Bisht Rawat visits the families of martyrs and brings their stories alive in a new book

A father who is still fighting for justice

Along with five other soldiers of his patrolling team, Saurabh was captured alive, brutally tortured, and killed by the Pakistan Army

In the small hill town of Palampur, you don’t need addresses to reach the houses of martyrs. All I do is put my head out of the window and ask, ‘Kya aapko Capt. Saurabh Kalia ka ghar maloom hai?’ (Do you know Captain Saurabh Kalia’s house?)’ People smile and guide me with gestures of the hand and tilts of the head, leading us in no time to a house with a sign at the gate that tells us we have reached a family that has borne personal loss. It is the internationally recognized icon of an upside-down rifle with a war helmet placed on top – a tribute to fallen soldiers. The dates 29 June 1976 to 9 June 1999, inscribed on black marble beneath Capt. Saurabh Kalia’s name, are a reminder that he died before the best years of his life.

The Kalias tell me how Naughty, as his parents called him, was as a boy – quiet and reticent, fond of cooking for his family and friends. They joke about how difficult it was to wake him up in the mornings and how when Mrs Kalia was told that in the IMA early risers were ordered to wear boots and run on top of late risers, she quickly got Saurabh an alarm clock, telling him worriedly, ‘Tu toh subah uthta hi nahi hai beta; tere upar toh woh roz boot waale ladke daudayenge. (You can never wake up early, son; they will make boys with boots run on top of you every day.)’ He had called home on 30 April 1999 to wish Vaibhav (his younger brother) on his twentieth birthday. He had said he was going ahead to the forward posts and might not be able to stay in touch for a while. ‘Don’t worry about me if I don’t call or write. I shall be home for my birthday (29 June),’ he had said. And then there had been silence. Saurabh Kalia was never to call the family he loved so much again.

Mrs Vijaya Kalia, who suffered a heart attack the day she heard Saurabh had gone missing, gave up her government job soon after his death but says she did not shed a single tear for him. ‘It would have diluted the magnitude of his sacrifice. I am very proud of my son. He gave his life for his country.’ A shattered Dr Kalia vowed that he would fight for the human rights of his son and five comrades who were subjected to torture for more than three weeks and make sure that the guilty were punished. Dr Kalia’s journey has been long and painful with roadblocks at every stage. ‘It doesn’t matter whether I get any success or not. I shall continue to fight for these soldiers till I die.’

The Shyok, river of death in Yarkandi Uyghur, meanders through these vast forgotten lands before slipping into Pakistan and merging with the Indus at Skardu. Adjacent to Subsector Haneef, named after the young officer who died on this craggy mountainside exactly two years after he had passed out of the IMA. It is poignant that this young boy with a Hindu mother and a Muslim father, who grew up celebrating both Eid and Diwali, died in a war between two countries that had been split on the basis of communal ideologies. He had gone to fight for 11 Rajasthan Rifles whose war cry is ‘Raja Ram Chandra ki Jai’.

Haneef’s body lay under the open sky and falling snow for 43 days, his handsome face frozen into a cold mask. When then Army Chief Gen. Ved Prakash Malik visited Mrs Hema Aziz, Haneef’s mother, in her small Mayur Vihar apartment in Delhi and told her the body could not be retrieved because the enemy was firing constantly, she met his eyes bravely and said she did not want another soldier to risk his life to get her son’s body back. ‘After the war is over I would like to go and see where he died,’ she said.

Haneef’s body was eventually retrieved. He was buried with full military honors in Delhi. Hema Aziz made the pilgrimage with her other two sons to Turtuk, to see where her son, who used to laughingly complain that she never had time for him, had given up his life for his country. This time, he was not around to see her.

‘Dearest Papa, Mama, Birdie and Granny’, begins the last letter that Vijyant (Robin) wrote to his family from Kargil in June 1999. ‘By the time you get this letter I’ll be observing you from the sky, enjoying the hospitality of apsaras. I have no regrets. In fact, if I am reborn as a human I will join the army again and fight for my nation’, he writes on the purple Forces Inland letter, his neat handwriting filling up the page. ‘If you can, please come and see where the Indian Army fought for your tomorrow’. He adds that whatever organ can, should be taken; he asks his parents to donate money to an orphanage and asks them to give Rs 50 every month to Ruksana, a three-year-old Kashmiri girl he had befriended in Kashmir during his short stint there. He signs off with a brave, ‘OK, then it’s time for me to join my clan of the Dirty Dozen. My assault party has twelve chaps. Live life kingsize. Your, Robin’. Vijyant had written this letter to his family just a few days before he went to battle. It’s the reason Col. Thapar comes to Knoll each year to commemorate the death anniversary of his son. And though it is becoming more and more difficult for Col. Thapar to make the treacherous climb to Knoll every passing year, he plans to honour that commitment for as long as he can.

Soldiers recognize and respect bravery, even if it is the enemy. A perfect example of this is the case of the late Capt. Karnal Sher Khan of the Pakistan Army. Very few people know that the Indian Army was instrumental in the officer being awarded the Nishan-e-Haider, Pakistan’s highest gallantry award, which is equivalent to India’s Param Vir Chakra.

In July 1999, Capt. Sher Khan was holding five strategically located posts in the Tiger Hill area, touching a height of 16,700 feet. It was so well-defended that General V P Malik stated in his book, Kargil – From Surprise to Victory, that it appeared almost impossible to capture. According to an officer of 8 Sikh, ‘After a fierce battle, we recovered Tiger Hill on 4 July. For the next four days we were gradually advancing to recover other features – the Helmet, India Gate and Rhino Horn. Soon after the soldiers of 8 Sikh recovered the feature on 7 July around 8 am, Capt. Karnal Sher launched a swift counterattack with just a handful of Pakistani soldiers. It was suicidal for him to do so in broad daylight because we could see his movements. Yet in the highest of military traditions, he launched an attack’. Such was the ferocity of his attack that 8 Sikh had to be reinforced by a platoon of 18 Grenadiers. Karnal Sher Khan fought till the end and finally fell when a hail of bullets hit him. Even in his last moments his hands were holding his rifle. The Indian Army wrote to the Pakistani government citing the bravery of the young officer. On the basis of this recommendation, Capt. Karnal Sher Khan was posthumously awarded the Nishan-e-Haider.

Rachna Bisht-Rawat is a journalist and writer with more than 20 years of experience. The Statesman, Indian Express, Deccan Herald, Outlook, Discover India and Femina are a few publications that she has written for. besides, a few websites like www.yourstory.com and Iconoculture, a global research and advisory company. She has worked with newspapers including Delhi Midday, The Statesman, Financial Express, Indian Express, Deccan Herald and The Hindu, has been atttached with the Leicester Mercury in the United Kingdom, reported on the London tube blasts, TN Seshan’s election campaign and the aftermath of the Kargil war. She has authored five books on the Indian Army, including three for Penguin Random House, one for the Assam Rifles and one detailing the history of her husband Lt Col Manoj Rawat’s regiment – The Three – a history of the elite 3 Engineer Regiment. She has also helped in editing the regimental history of The Fifth Airborne, the Indian Army’s highly decorated Para regiment, to which her late father Brigadier B.S. Bisht, SM, VSM, and her brother Col Sameer Bisht, SM, belong.
Share