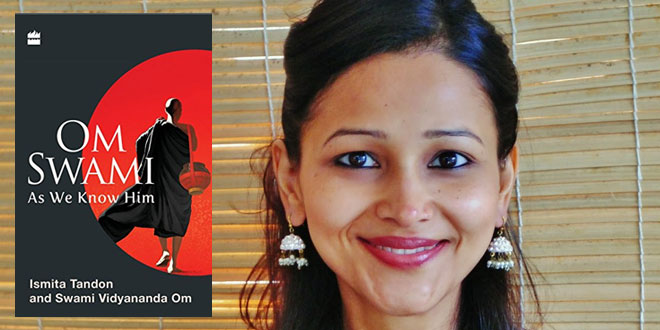 Ismita Tandon Book Review: Om Swami As We Know Him

This is a book for believers. If you don’t have faith in god, avoid this. But if you are a devotee, this will be an eye-opener of a book.

To those who may have considered the young Om Swami just another New Age monk in ochre robes, Ismita Tandon and Swami Vidyananda Om unveil a religious leader who evokes great reverence. Om Swami renounced enormous wealth and a life of luxury to take to meditating 22 hours daily in harsh Himalayan weather in search of divinity. When Vidyananda — from Karnataka — met Om Swami in Hardiwar, he was delighted he had finally found a Guru he had been seeking for eight long years.

Here was a simple, austere monk who presided over an equally simple ashram in a remote part of Himachal Pradesh, accepting no material donation from anyone. But there were numerous instances when he could accurately read people’s minds, foresee unexpected visitors and events, and even predict the problems with which people approached him. Where needed, he would take recourse to chanting a mantra that “carried with a strange healing power that almost instantaneously granted relief to patients”, particularly the poor who sought him out from nearby villages where medical facilities were scarce and life was any way tough.

In no time, Vidyananda was convinced that Om Swami was truly a man of god. “I was no longer surprised by anything Gurudev did or said. Anything he would say would come to pass just as He had predicted it would. He could see anyone’s past or future. He could tell about a person just by hearing his name.” To any question Vidyananda would pose, Om Swami had one answer: “Nothing is impossible with the grace of Mother Divine.” Vidyananda says there isn’t a Tantravidya or Tantrasadhana that Om Swami doesn’t know.

Award-winning poet and author Ismita Tandon was no believer when she came into contact, after a string of personal mishaps, with Om Swami. But her spiritual transformation was rapid. The monk’s uncanny ability to see through people was downright intimidating at times. “From accurately telling the location of a mole on a person’s clothed body, to misdeeds that they hadn’t confessed – and even significant events of their past and future – nothing, it seemed, could remain hidden from (Om) Swami.”

So fascinated is Vidyananda, himself deeply religious, by his Guru and his hidden divine powers that one day he asks: “Who are you, Gurudev? Please tell me.” Pat comes the answer: “I am a simple sadhu in a complex world.”

Om Swami is clearly much more than that. This is truly a fascinating book. “Om Swami As We Know Him” is sure to transform innumerable lives in the times to come.