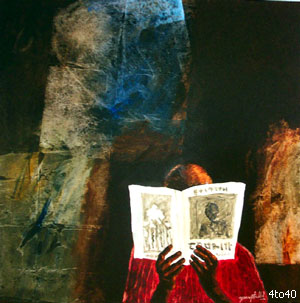 Yusuf Arakkal was born in 1945 at Kottakkal, Kerala. His mother belonged to the royal family of Arakkal, the only Muslim royal family to have ruled Kerala and his father to Keyees, the well known business family based at Kozhikode and Thalassery. Yusuf lost both his parents at an early age.

Leaving the comforts of his house behind, the boy Yusuf left for Bangalore, lonely but with a passion to become a painter. The hardships that he faced at Bangalore honed the artist in him and sharpened his sensibility. He took a diploma in painting from Karnataka Chitrakala Parishat (KCP), Bangalore and later specialized in graphic print making from National Academy community studios, Garhi, Delhi.

Arakkal’s paintings are singularly expressionistic in style. In them one could trace the artist’s “deep concern for man and society. Set against a dark, oppressive background are the faceless figures of ordinary people expressing brooding loneliness and despair brought on by a society obsessively drawn towards material success where ordinary people have no place”