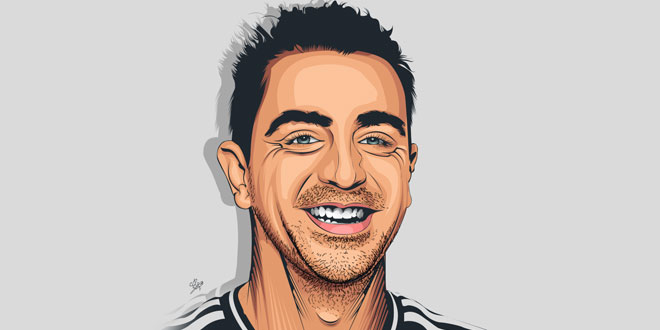 Xavi — Xavi Hernandez, who has pulled the strings in the centre of the field for Barcelona for a decade, was voted the best player at UEFA EURO 2008, with few disagreeing.

Aside from his undoubted creative genius, the visionary Catalan is a phenomenally hard-worker who never shirks his defensive responsibilities. Able to occupy any central-midfield role, Xavi’s reading of the game is allied to a powerful shot, which ensures he weighs in with his fair share of goals. Also adept at set-pieces, he has the ability to make his team-mates tick, be it at international or club level.

Having come through Barcelona’s fabled Can Barca during the era of Johan Cruyff and his Dream Team, Xavi has followed in the footsteps of the man who helped knit that glorious side together: current Azulgrana supremo Josep Guardiola. Indeed, it was Xavi who filled in for the injured Guardiola in 1999/00, slotting so well into the role the club had a ready-made replacement for when ‘Pep’ left for Italian football. Since then, no matter who has held sway in the Barça dugout, Xavi’s status as an automatic starter has remained unchanged. Whatever their various coaching philosophies, nobody has yet been able to do without his eye for a defence-splitting pass, close control in the tightest of situations and willingness to drop back and protect his back four.

At the club since the age of 11, the Blaugranas are his one and only team to date, and it would appear unlikely he will stray now given his lead role in arguably Europe’s finest footballing side. As far as international duty is concerned, after captaining the Spain side with won the 1999 edition of the FIFA U-20 World Cup in Nigeria, as well as the team which finished runners-up at the Olympic Football Tournament Sydney 2000, he made his senior La Roja debut in November 2000 and has not missed a major tournament since.

Xavi is a vital cog in the Spain machine or perhaps the oil that makes it run smoothly. A leader by example, who rarely loses the ball or misplaces a pass, Xavi is a midfield orchestrator par excellence with the ability not only to read the flow of a game but to dictate it in his side’s favour.

During the 2009-2010 season, journalists increasingly noted Xavi’s contribution to the Barcelona side. For example:

“Quite simply the best midfielder in modern football, and one of the greatest ‘centre’ midfielders of all time. It could even be argued that Xavi and Lothar Matthaus are the two best in this position in history. World class for several years now, it is the past three seasons in particular where the 30-year-old has been untouchable. Xavi’s passing is up there with Michel Platini, he creates countless goals with genius through balls while virtually never relinquishing possession.”

On 9 June 2010, he signed a new 4 year contract with the club, which may be automatically renewed up to 30 June 2010 based on number of games he played.