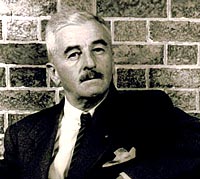 William Faulkner — William Cuthbert Falkner was born in New Albany, Mississippi, he was the oldest son of Murry Cuthbert Falkner and Maud Butler. He later changed the spelling of his name to Faulkner. His brothers were Murry Charles “Jack” Falkner, author John Falkner (later Faulkner) and Dean Swift Falkner.

Faulkner was raised in and heavily influenced by the state of Mississippi, as well as by the history and culture of the South as a whole. When he was four years old, his entire family moved to the nearby town of Oxford, where he lived on and off for the rest of his life.

Faulkner attended the University of Mississippi (Ole Miss) in Oxford where he was a member of Sigma Alpha Epsilon social fraternity. He enrolled at Ole Miss in 1919, and attended three semesters before dropping out in November 1920.

William Cuthbert Faulkner was an American novelist, film screenwriter and poet. He is considered one of the most influential writers of the 20th century. Faulkner was awarded the 1949 Nobel Prize for Literature. His works feature his native state of Mississippi. He wrote novels, short stories, Hollywood film scripts and poems.

Faulkner is known for the meticulous attention he gave to diction and cadence in his writing. His themes were timeless, and one of them held that fiercely intelligent people dwelled behind the facades of simpletons. He won the Nobel Prize for Literature and two Pulitzer Prizes, for his 1954 novel A Fable, and then his 1962 novel, The Reivers, which was posthumously awarded the Pulitzer in 1963. Faulkner donated a portion of his Nobel winnings “to establish a fund to support and encourage new fiction writers”. This resulted in the PEN/Faulkner Award for Fiction. He donated another portion to a local bank to establish an account to provide scholarships to African-American education majors at Rust College in Mississippi.

Faulkner is best known for his Yoknapatawpha cycle, a comedie humaine of the American South, which started in 1929 with Sartoris / Flags In The Dust and completed with The Mansion in 1959. Yoknapatawpha was a densely imagined, mythical world, based on his native place, Lafayatte County in Mississippi, and characterized by frequent reappearances of the same characters, setting, places and themes.

Faulkner served as Writer-in-Residence at the University of Virginia from 1957 until his death. In 1959 he suffered serious injuries in a horse-riding accident. Faulkner died of a heart attack at the age of 64 on July 6, 1962, at Wright’s Sanitorium in Byhalia, Mississippi.