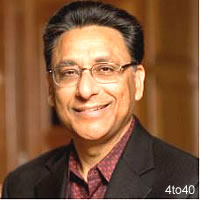 Vinod Dham (born 1950 in Pune) is popularly known as the father of the Pentium processor. He had his initial schooling in Pune. He did his Bachelors in Electrical Engineering from Delhi College of Engineering in 1971. Thereafter he had a brief stint with Continental Devices, a Delhi based semiconductor company.

In 1975, Vinod Dham went to the US and did his Masters in Electrical Engineering from the University of Cincinnati. After completing his Masters in 1977, Vinod Dham joined the National Cash Register (NCR) at Dayton, Ohio. Vinod was a team member of the NCR’s memory design group. He received many patents for his work at NCR.

While making a presentation at the IEEE conference in Monterrey, California on re-programmable memory, Vinod Dham received an offer from the Intel to work with them. In January 1990, Vinod was in-charge of developing the 586 or Pentium processor. He worked relentlessly on the project and the Pentium processor was a big hit in the market. Vinod Dham rose up the corporate ladder and reached the position of the Vice President of the Intel’s Microprocessor Products Group. He quit Intel in 1995.