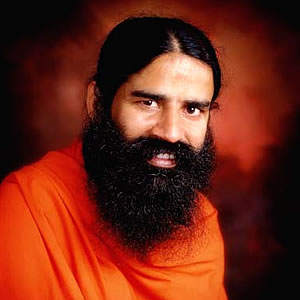 Swami Ramdev, was born as Ramkishan Yadav in Alipur, in the Mahendragarh district of Indian state of Haryana. He attended school through the eight grades in Shahjadpur. Thereafter, he joined a yogic monastery (gurukul) in Khanpur village to study Sanskrit and Yoga. Eventually, he renounced worldly life and entered into Sanyas (monastic living) – taking the name Swami Ramdev.

Then he went to Jind district and joined the Kalva gurukul and offered free Yoga training to villagers across Haryana. It is said that he travelled the Himalayas for several years before he settled in Haridwar. He claims to have discovered several medicinal plants in the Himalayas, which he uses in treating his patients. Ramdev started relentless efforts to popularize Yoga in 1995 with the establishment of Divya Yoga Mandir Trust along with Acharya Karamveer.

In 1995, Ramdev joined the order of swamis after being initiated into the ascetic order by Swami Shankerdevji Maharaj. While training to be a Swami, Ramdev spent many years undertaking an intense and thorough study of ancient Indian scriptures. At the same time, he also practiced intense self-discipline and meditation.

He teaches that God resides in every human being and that the body is God’s temple. He is a firm believer in the concept of Vasudaiv Kutambakam (the whole World is one family) and decries practices that discriminate on the basis of caste, creed or gender. His fundamental belief is that expressions of love, affection and compassion towards all living things are the true worship of the Creator.

Ramdev has taught several aspects of traditional Indian scriptures such as Ashtadhyayee, Mahabhashya and Upanishads along with six systems of Indian Philosophy in various Gurukuls (traditional Indian systems of education). He has helped establish Gurukuls in Kishangarh, Ghashera, and Mahendragarh in India. He has also founded the Patanjali Yogpeeth Trust, which has built several institutions. In addition to helping people learn about Yoga and spirituality, these institutions also provide a comprehensive facility that promotes the practice of Ayurveda – the traditional system of holistic medicine developed in India.

He teaches Pranayama which is a series of techniques for breath control that were developed as a part of the ancient Indian system of Yoga. Heretofore, these techniques were often thought of as being esoteric and complex and portrayed as being unsuitable for lay people. Consequently, their use was often limited to advanced practitioners of Yoga and undertaken only under the strict supervision of an experienced teacher. Ramdev has worked to break these barriers and help make the practice of Pranayama achievable by the ordinary layperson.

His educational show is broadcast on Indian national TV (AASTHA channel) from morning 6-8 am and evening 8-9 pm (IST) several times a week and he also has dedicated shows such as Total Tandurusti airing on Zee network, a show on Sahara One at 9:00 am, Yoga Science on India TV at 7:30 am & 1:30 pm. Total viewer ship is in millions. According to the synopsis that is available to Sky Digital viewers, Ramdev “claims that he was a paralytic” prior to taking up Yoga, but this claim has yet to be verified.

He has been conducting monthly training camps in cities all over India. Total attendance in these camps exceeds tens of thousands

The Pranayama programme as taught by Swami Ramdev consists of the following seven key breathing exercises (in sequence):

Building on the labour demands, Brinda Karat, a New Delhi based CPI(M) leader and wife of CPI(M) leader, Prakash Karat, called a press conference alleging unhealthful manufacturing practices in the pharmaceutical company. She also accused the pharmacy of using animal and human parts in the manufacture of their ayurvedic medicines. Though ayurvedic texts allow the uses of such substances in the manufacture of some of the ayurvedic medicines, this violated, according to Brinda Karat, the laws related to proper labeling of medicines.

The controversy reached a flash point in January 2006 when Brinda Karat produced an Indian health ministry laboratory report supporting her claim that Divya Yog Pharmacy, owned by Ramdev, was using human and animal bones in his medicines. She claimed that a sample of the medicine (Kuliya Bhasm and Yauvanamrit Bati, purchased from Brahmakalp Chikitsalay, which is the Trust’s hospital at Haridwar) was tested at government labs, which later confirmed the presence of animal materials in the sample. She exhibited the prescription and cash receipt obtained from the medicine counter in support of her claim.

In a subsequent press conference Brinda Karat presented some of the expelled workers who claimed to have used Human skulls in preparing medicine.

The charges were denied by Ramdev and his followers who accused Brinda Karat and the CPI(M) of being agents of multinational pharmaceutical companies. Four samples sent to the government-recognized research center (Shriram Institute of Industrial Research, Delhi) were reported as indicating that the medicines contained no objectionable ingredients and were purely herbal. Uttarakhand state Health Minister Tilak Raj Behad announced this to BBC in March 2006. This refuted Karat’s claims that Ramdev was part of any wrongdoing. Ancient Ayurvedic texts do, at times, proscribe the use of animal materials.

Many left leaning Indian politicians like Sharad Pawar, Mulayam Singh Yadav, and Ambika Soni came out in support of Ramdev. Narayan Dutt Tiwari, Chief Minister of Uttarakhand, praised Ramdev for popularizing Uttarakhand and Haridwar. The spokesmen of Hindutva organizations such as VHP and RSS condemned the allegations made against Ramdev and his pharmacy.

Even after this controversy, Ramdev conducted four camps in United Kingdom and he continues to be popular among both resident and expatriate Indian populations. He has been recently invited by the UNO to deliver a lecture on his ‘poverty alleviation’ programme.

In January 2007 Swami Ramdev was awarded an Honorary Doctorate degree by KIIT University in India, in a ceremony presided over by Nobel laureate Richard Ernst.

Share
Previous Why is quartz used in watches?
Next Swami Satyananda Saraswati