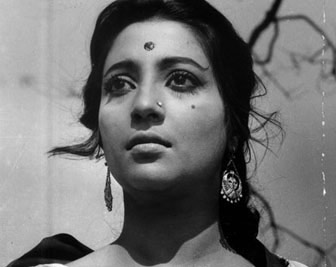 Suchitra Sen (born as Roma Dasgupta; 6 April 1931 – 17 January 2014), was an Indian film actress who worked in Bengali and Hindi cinema. The movies in which she was paired opposite Uttam Kumar became classics in the history of Bengali Cinema.

Suchitra Sen was the first Bengali actress to receive an award at an international film festival when, at the 1963 Moscow International Film Festival, she won the Silver Prize for Best Actress for Saat Paake Bandha. In 1972, she was awarded the Padma Shri, one of the highest civilian awards in India. From 1979 on, she retreated from public life and shunned all forms of public contact; for this she is often compared to Greta Garbo. In 2005, she refused the Dadasaheb Phalke Award, the highest cinematic award in India, to stay out of the public eye. In 2012, she was conferred the West Bengal Government’s highest honour: Banga Bibhushan.

She was born in Pabna district in Bangladesh 1931. She married Dibanath Sen, son of a wealthy Bengali industrialist, in 1947 and had one child, Moon Moon Sen, who went on to become an actress. Her daughter Moonmoon Sen also acted in a few films in Hindi and Bengali. Moonmoon Sen’s daughters Riya and Raima are also actresses.Her father Karunamoy Dasgupta was the head master of the local school and her mother’s name was Indira Dasgupta. She was their fifth child and third daughter. Roma had formal education in Pabna.

Suchitra made her debut in films with “Shesh Kothai” in 1952, but the film was unreleased.The following year saw her act opposite Uttam Kumar in “Sharey Chuattor”. The film became a box-office hit and it was remembered for launching Uttam-Suchitra as a leading pair. They went on to become the icons for Bengali melodramas for more than 20 years, becoming almost a genre to themselves.

She received a Best Actress Award for the film “Devdas” (1955), which was her first Hindi movie. Her patented Bengali melodramas and romances especially with Uttam Kumar, made her the most famous Bengali actress ever. Her films ran through the 1960s and the 1970s.

Her husband passed away, but she continued to act in films, such as the Hindi hit film “Aandhi” (1974), where she played a politician supposedly inspired by Prime Minister Indira Gandhi. Sen received a Filmfare nomination as Best Actress, while Sanjeev Kumar, who was her husband in the movie, won the Filmfare as Best Actor.

She retired from the screen in 1978 after a career of over 25 years to a life of quiet seclusion. She has avoided the public gaze after her retirement and has devoted her time to the Ramkrishna Mission.

Suchitra Sen was a contender for the Dadasaheb Phalke Award for the year 2005, provided she was ready to accept it in person. Her refusal to go to Delhi and personally receive the award from the President of India deprived her of that award.

Suchitra Sen was admitted to the hospital on 24 December 2013 and was diagnosed with a lung infection. She was reported to have been recovering well in the first week of January. She died at 8.25 am on 17 January 2014, due to a heart attack.

Share
Previous Why Does Water stay Cool in ‘Matkas’?
Next Why does wood have a grain?